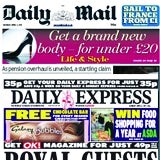 Lord Rothermere, chairman of the Daily Mail and General Trust, and Richard Desmond, chairman of Northern and Shell, are said to have met earlier this year and are planning further talks, according to a Daily Telegraph report.

A merger could create a title with a combined circulation of more than 3 million. The deal would also mark the end of hostility between the two papers, which for years engaged in mudslinging on their front pages.

Desmond was reported to be “ready to sell” his print magazines, including OK!, New and Star last month, although Northern and Shell denied the claims.

Analysts have previously said that Desmond, who bought Channel 5 for £103.5m last year, is keen to trim down or combine his print assets in order to concentrate on other media.

DMGT and Northern and Shell did not return requests for comment in time for publication.