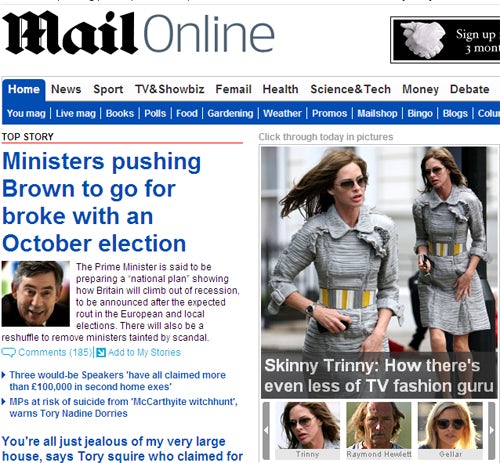 Publisher Daily Mail & General Trust (DMGT) is investigating a paid-for model across MailOnline and its other consumer sites, according to reports.

The move comes as other publishers, such as News International, Thomson Reuters and Guardian Media Group, explore charging for content.

Martin Morgan, DMGT CEO, told the Financial Times, “We are certainly looking at these models. What is in some ways exciting is that the conversation is being had and the game is moving on from the broad-brush approach that everything had to be free.”

The news counters previous comments from MailOnline MD James Bromley, who in March told new media age that charging for content would only suit publishers with niche content such as the Financial Times (nma.co.uk 27 March 2009).

Yesterday DMGT announced on Thursday that its profits had fallen 47% for the six months to the end of March (nma.co.uk 21 May 2009).

Childrens charity NSPCC has launched a direct marketing campaign to raise awareness and funds for its Young Witness Service (YWS).

Market research firm Ipsos MORI has appointed Ben Page as chief executive of its UK and Ireland business. Page steps up from his current role as head of Ipsos MORI’s public sector practice and replaces Mike Everett who will take on a new global role on the Ipsos Group management board. The appointment comes as […]