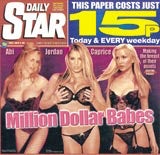 The Daily Star could be risking returning to the status of “direct response hell-hole”, following the newspaper’s decision to raise advertising rates by up to 25 per cent, warn media agencies.

The Daily Star, owned by Express Newspapers, is trying to push through a sizeable hike in advertising rates in one swoop from March. The move has aggrieved media buyers who say that they are now advising clients on a case-by-case basis whether to use the newspaper.

The Daily Star has been successful in attracting brands in recent years, with AOL, ITV, Kia, O2 and Woolworths among those who have taken display advertising. The newspaper is seen as cheaper than The Sun and The Daily Mirror on a cost-per-thousand basis and delivers a young readership.

But one agency insider says: “To try to raise rates by this much in one hit is ludicrous and there is a danger that if they alienate too many people they will lose their branded ads and become a direct response hell-hole.”

The Daily Star slashed its cover price from 35p to 15p in the Carlton and Meridian regions at the start of January. The move is interpreted as an attempt to bolster circulation figures to justify the ad rate increase.

The Daily Star’s average net circulation for December dropped 4.25 per cent from November to 810,238, according to Audit Bureau of Circulations figures. For the six months from July to December 2004 it dropped 1.26 per cent year on year.