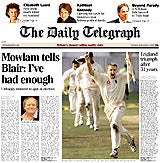 The Daily Telegraph has been given a major facelift, designed to give it a sharper, cleaner look.

The new-look paper will appear on Monday, with new columnists on the comment pages, additional space for sport on the back page, increased weather coverage and extended radio listings.

New fonts and bolder, left-aligned headlines will be introduced, along with greater use of white space.

The design changes will also be carried through to The Daily Telegraph Saturday package and include a facelift for the Travel section. The personal finance section, Money-go Round, will be renamed Your Money.

Daily Telegraph editor Charles Moore says: “During the past decade, The Daily Telegraph has undergone significant changes, producing fresher, livelier content in addition to its unrivalled coverage of home and foreign news. The redesign will allow new readers to sample the excellence of our product, while current readers will find it a brighter-looking newspaper.”

The Daily Telegraph’s average net circulation for the six months ending July is down by 1.24 per cent year-on-year to 1,031,202, according to the latest figures from the Audit Bureau of Circulations.

The Sunday Telegraph will not be affected by the new design changes. Its average net circulation for the same six-month period is also down – 1.15 per cent year on year to 808,038.

The Ryvita Company’s UK sales and marketing director, Debbie Wyatt, has quit after less than nine months in the role. It is unclear whether Wyatt, who was appointed to the top UK marketing position in January, has a job to go to. No one at Ryvita was available for comment on Wyatt’s departure as Marketing […]

Computer manufacturer Hewlett-Packard’s top UK and Ireland business marketer, Becky Carroll, is returning to the US after almost three years in the role. Carroll, director of marketing for enterprise computing, UK and Ireland, is currently seeking a role within Hewlett-Packard in the US. Carroll, who came to the UK as part of a secondment programme […]

What gives TV advertising a bad name? Can the medium keep the public’s faith?