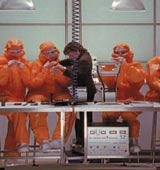 Orange maintains that its current Learn campaign, backed by &£10m-worth of advertising, is working, despite the critical brickbats. However, a press briefing by vice-president of marketing Jeremy Dale, just seven weeks into the initiative, has seasoned Orange-watchers wondering if all is well within the company (MW last week).

Dale denies the briefing was a defensive response to hostile criticism of Learn, claiming instead that the meeting was requested by national newspaper journalists who wanted further information on his ambitious campaign.

At the briefing, Dale revealed that the number of customers in Orange stores was up 13 per cent year on year in May. The company is pleased with this performance: May was reportedly the worst month for retailers in four years.

According to Millward Brown, Learn has achieved 47 per cent recall among the UK population, and 65 per cent of those who recall the ad agree strongly that it suggests Orange will help people learn to get more out of their phones.

However, at least two Orange insiders, and several industry observers, believe that, by giving the briefing, Dale was protecting himself from internal pressure originating in several divisions within the company.

Dale was appointed to the newly created role of UK brand marketing director at Orange last year, five months after the closure of the ill-fated ITV Digital, where he had been marketing director (MW July 11, 2002). His arrival coincided with an advertising review and cynics predicted he would plump for his former ad agency Mother – which created ITV Digital’s brand icon, Monkey.

Dale did not disappoint: sure enough, the &£41m business went to Mother (MW October 24, 2002). Insiders say none of the agencies that pitched had cracked the brief, but Dale and his team genuinely felt they got on best with the Mother team.

Having such faith in one agency has probably done Dale few favours in the wider advertising industry. Some of his fiercest critics say Orange is now taking its strategy from its advertising agency, rather than the other way round. The first campaign to appear from Mother was the “hard-nosed” business campaign. Its brutal images of a man with a nose which appeared to be made of steel have been heavily criticised. Not only by the advertising industry but also by Orange founder Hans Snook, who said the images were “absolutely the worst things I have ever seen”.

Another advertising executive, who has worked on the Orange business in the past, described the business ads as “a bit of a gaffe”, and doubts they will run again

Dale is unrepentant: “When it comes to business-to-business marketing, the first people to tell you the truth are your salesforce,” he says. “They tell me that since the ads broke, they are getting on more pitch lists and sales levels are up.” However, when asked if the ads will run again he says only “possibly”.

On Snook’s comments, Dale will only respond: “Everyone is entitled to their opinion. Hans Snook did an awful lot for Orange when it launched. Now we’re evolving it.”

In May, Dale launched his biggest initiative yet – Learn. Learn’s aim is to encourage consumers to make the most of their mobile phones’ features. With the handset market at saturation point, servicing existing customers is set to become an important source of revenue for mobile providers.

The ad, which is still on air, features a 13-year-old boy called Dylan, who teaches Orange’s retail staff – now called “trainers” – how to enable the company’s customers to get the most from their handsets.

The marketing and advertising industry has given the campaign a better reception than it did for the hard-nosed businessman executions. Charles Vallance, who worked on the launch of Orange at WCRS and is a founding partner of O2’s agency Vallance Carruthers Coleman Priest (VCCP), says it is a step in the right direction. He adds, however: “More phone use is not necessarily a benefit for customers. This is more about company insight than customer insight, and I’m not entirely convinced that customers want to get more use out of their phones.”

“What is happening with the brand is very disappointing,” says John Williamson, board director at brand consultancy Wolff Olins, which created the Orange brand. “The hard-nosed businessman was a weak concept, and I can’t think what good will come of having a patronising child telling you how to use your mobile phone.”

However, Williamson believes the brand is strong enough to outlast two weak advertising campaigns and says that in order to stand out Orange must evolve, “but not backwards”.

He adds: “When we launched Orange, all the other brands were weak. The others have now become very strong and Orange is not trying to differentiate itself. The one which breaks the mould now will be the winner over the next five years.”

Dale defends the Learn ads by saying they conform to the key principles behind the Orange brand when it launched. He says that Orange has always been about “finding the consumer’s problem and solving it”.

Dale, who worked in partnership with Orange retail chief Nick Moore on the Learn initiative, says feedback has been excellent and that the trainer idea is being taken up in France.

Ovum senior analyst Michele Mackenzie says Learn is one of the most impressive things that Orange is doing at the moment: “We have been saying for years that companies have to help their users when it comes to data services. However, although it is one of the good points, it is an isolated part of a strategy which is not very cohesive.”

One of the main objectives of the &£10m Learn campaign is to increase the number of consumers who will pay the &£4 monthly subscription fee to Orange Open Access – the network’s unlimited WAP access bundle. Since the launch of Open Access, the number of customers who have signed up has tripled from 100,000 to 300,000. This may sound impressive, but realistically only adds an extra &£800,000 of revenue a month.

Dale, as ever, is bullish: “This is 50 per cent above our target. My boss [Orange UK chief executive John Allwood] is pleased.”

Insiders, some of whom have hinted that Dale’s impromptu press briefing was more about impressing internally than externally, find Dale’s reference to Allwood telling. The same insiders also say there is a lot of tension between the UK marketing team and the Orange World marketing team, headed by Alex Batchelor.

Dale shrugs off this accusation: “Batchelor is one of my mates. One of the things we are seeing is a more uniform approach. We make the best use of our resources and we work in collaboration with Orange World.”

The jury is still out, both internally and externally, on Dale’s advertising strategy, but with Allwood’s stamp of approval on his appointment, risk-taker Dale’s position seems to be safe for now.