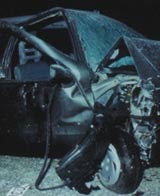 The Department of Transport (DoT) has awarded its high-profile £2m drink-driving account to D’Arcy. The agency lost the business to Abbott Mead Vickers.BBDO (AMV) in 1998.

D’Arcy pitched against WCRS, BMP DDB and the incumbent (MW May 30).

The decision to appoint D’Arcy does not affect AMV’s work on the DoT’s other advertising, including the campaign against driving while tired.

AMV has courted controversy in the past for its disturbing ads showing shocking images of car crashes caused by drink-drivers.

Earlier this year, the The Department of Transport, Local Government and the Regions (DTLR), as the DoT was previously known, took the controversial decision not to go through COI Communications – which traditionally handles advertising for all government departments – and appoint its own roster of agencies to work on its £20m business.

Media work for the DoT is through Carat.

Last month, D’Arcy was appointed alongside MediaVest by the Driver and Vehicle Licensing Agency (DVLA) to handle the advertising for its £2.5m campaign to promote changes to the vehicle registration system. The two agencies acted together in the four-way pitch, through the COI (MW June 13).