The latest figures from GfK’s consumer confidence index show that propensity to make a big purchase increased by five points in November to 0. This despite a two-point decline in how confident people feel about both their personal financial situations and the economic situation.

Separate figures from YouGov and the Centre for Economic and Business Research also show an increase in expectations about households’ financial situation over the next 12 months after ONS figures showed the first real wage increase for five years. The figures now stands at the highest level since YouGov began measuring this data in 2009.

Its overall consumer confidence index was also up by 2.1 points in November to 111.5, although this is still below the levels seen in spring and summer this year as concerns remain about job security and levels of business activity.

Stephen Harmston, head of YouGov Reports, says: “It seems that the recovery has finally started to reach people’s pockets. However, there is a dark cloud on the horizon. The data looking at job security continue to fall suggesting that at the very moment consumers feel the benefits of growth they are becoming more circumspect about their employment prospects. This in turn threatens their willingness to spend in the long-term and hints at problems for the recovery in 2015.”

Nevertheless, the upward trend in November will offer a lift for retailers ahead of the critical Christmas shopping period. Figures from John Lewis suggest that consumers are starting to make bigger purchases to ensure their homes are “guest-ready” for the festive season, with the retailer experiencing a particularly strong increase in furniture and home entertainment products over the past two weeks.

Overall, GfK’s index dropped remained steady at -2, with increases in how positive people felt about their personal finances and economy over the past 12 months failing to offset the declines. November marks the eighth month in a row the index has stood with two points either way of -1.

Nick Moon, GfK’s managing director of social research, says the figures show the UK economy is in “very different territory” to the period between April 2013 and June 2014 when there was a dramatic rise. The last time the index was this “sluggish”, he adds, it lasted for 16 months which, if it were to continue for the same length this time, would go right up to the election.

“We are a little over 5 months from the next general election. Will the Government be able to ride into it on a rising tide of confidence? Our Consumer Confidence survey is making that a very difficult question to answer. You could argue there is an underlying willingness to spend and that’s good news for retailers.

“Results on specific topics like this are more volatile than the overall Index, but the key in coming months is to watch all the elements to the Index to see if the ‘feel good’ factor is in evidence.” 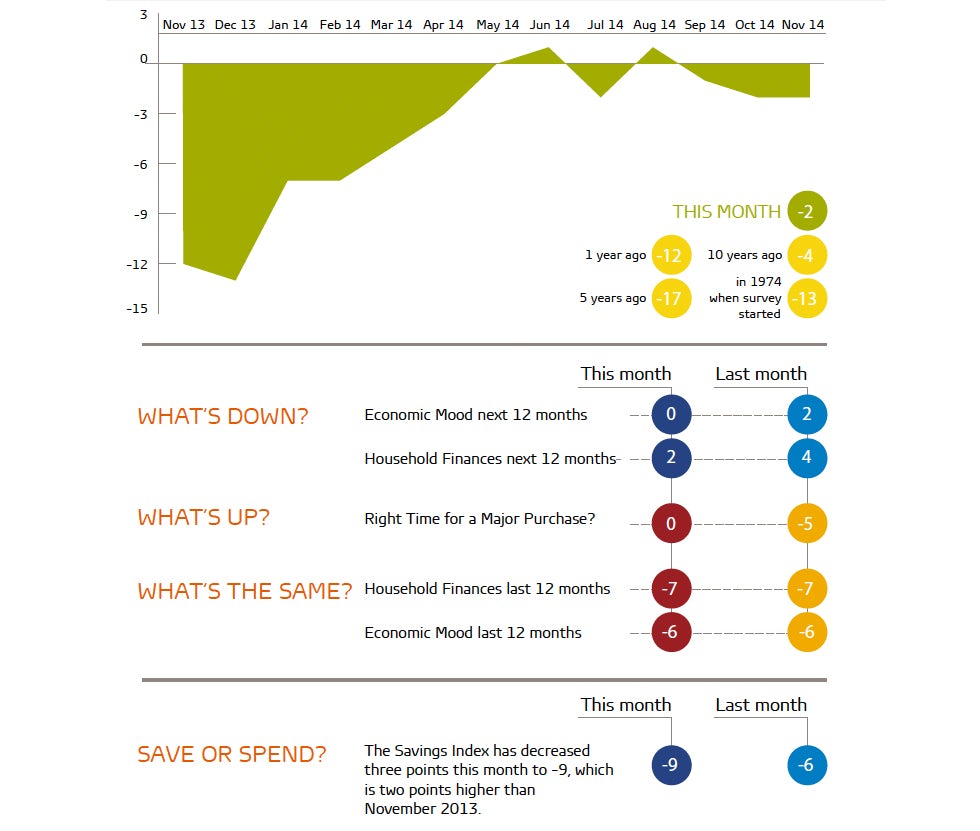 Consumers are taking a “wait and see” approach to making big purchases despite an improvement in their personal financial situations as increases in consumer confidence “run out of steam”.

Digital will play a “key role” in Christmas spending this year, with 40% of physical sales digitally influenced and click-and-collect almost doubling to £2.5bn, boosting sales over the festive season to £42.2bn, according to new research.

Christmas is a time when retail sales ramp up but how can the seasonal rush be converted into loyalty that lasts?