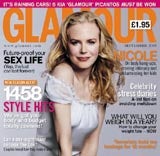 What the country needs is a touch of glamour, and who better to provide it than, er, Glamour magazine? From September 5 to 10, Glamour will be running National Glamour Week, featuring “Random Acts of Glamour”, which will involve giving cars to random female passers-by around the UK. Lucky them.