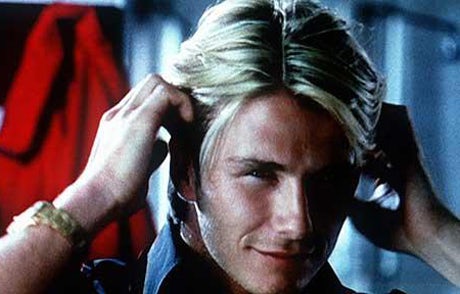 Brylcreem signed a reported £4m deal to take on Beckham in 1997, when he was a tabloid hunk often in the gossip pages with his then girlfriend Posh Spice. Unfortunately for the hair styling brand, things went a tad downhill from there. The following year, Beckham became England’s pantomime villain, being sent off in the last 16 World Cup clash against Argentina for an infantile kick on Argentina’s Diego Simeone. He dismayed the branding team even further two years later by shaving off his long locks.

Beckham took to the screen shortly before leaving Manchester United for Real Madrid, donning a stetson to utter the immortal spaghetti western one-liner “Pepsi”, before taking on the likes of Casillas and Ronaldo in a high stakes at noon football showdown.

David Beckham sported one of his many dodgy barnets for the ad promoting Vodafone’s now quaint-sounding multimedia WAP service. Soundtracked by the irritatingly catch “Can You Dig It” by The Mock Turtles.

Intimately Yours by David and Victoria Beckham
2010

Watching Posh and Becks getting steamy is one of those things you know goes on behind closed doors but hope you never, ever see with your own eyes. Apparently making their entire viewership feel uncomfortable was the strategy for selling thousands of bottles of the Beckham’s fragrance line “Intimately yours”.

It’s difficult to imagine Beckham doing his weekly supermarket shop, but Sainsbury’s saw him as the perfect fit to front its London Paralympic Games sponsorship and subsequent Active Kids campaigns.

David Beckham’s pants run provided reams of tabloid inches after hacks rumbled him for drafting in a lookalike for the sequence because the star of the show “did not have enough time” to film it. The crotch and backside is definitely all his though, he whined to a French TV station.

The British Army has launched a TV push to recruit 10,000 new candidates in a move to challenge “misconceptions” it is not hiring.