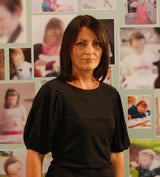 The three-minute, call-to-action advert created by DTV Group, breaks today (12 October) during the Channel 4 News with McCall raising awareness of child neglect and urging the public to make donations.

The charity is also supporting the appeal with online activity through social networking sites Facebook, Twitter and YouTube, as well as a viral email to encourage existing and potential supporters to run fundraising events and make donations.

Other celebrities including Timothy Spall, David Morrissey, Jessica Hynes and David Threfall will also be involved in the campaign.

Polly Neate, Action for Children executive director of external relations and communications says: “The same issues for neglected children and their families are coming up time and time again, but we can make a difference.

“That’s why it’s so important, through integrated marketing, PR, and fundraising activities that our appeal reaches out to all stakeholders. We need to make everyone aware, to call on them to be extra vigilant and donate to our appeal.”