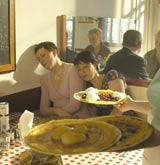 DFDS Seaways has moved its £1m UK advertising account out of DDB London to Danish agency Halbye, Kaag &amp; Thompson, as the cruise and ferry operator attempts to build a pan-European brand.

DDB London worked with UK sales and marketing director Matthew Eastlake to produce the first DFDS television campaign in the UK for four years in February this year (MW February 19).

The Danish agency is a J Walter Thompson shop and was appointed after a review at the DFDS Seaways head office. The company is developing new concepts for its on-board passenger areas and is planning a campaign across several territories next year.

The UK TV campaign was created to increase the operator’s share of the short-break market and increase passenger numbers on the Newcastle to Amsterdam service. It targeted 25- to 60-year-old couples and mixed groups, and ran in Tyne Tees, Yorkshire and Central Scotland.

Eastlake was promoted to sales and marketing director in January 2002, filling a position that had been vacant for three years (MW January 8, 2002).

Concerns about pollution and the harm they cause in road accidents is sparking a revolt against SUVs.

MG Rover has appointed former Kia marketing director Guy Jones as its top UK marketer. Jones, who resigned from the Korean car manufacturer in March for personal reasons (MW March 4), will oversee all marketing and PR for the MG and Rover brands in the UK. His job title is marketing and PR manager for […]

Scottish Media Group (SMG)-owned national commercial station Virgin Radio is planning to compete with print advertising with the launch of a quick-turnaround initiative that allows advertisers to run campaigns on the station within three hours of handing in a brief. Live Advertising will launch on the station later this month and electrical retailer Dixons has […]