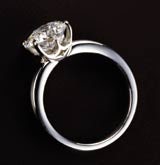 De Beers LV, the diamond brand’s retail venture with luxury goods company LVMH Group, is seeking an advertising agency ahead of a repositioning of the brand. It comes just weeks after supermodel Iman’s contract as the face of the brand was not renewed.

It is understood the venture is working on a new positioning and marketing strategy, which is being overseen by marketing director John Christophe Gandon, and that a new campaign is scheduled for launch before the end of this year. The company spent £790,000 on advertising last year.

De Beers LV was formed in 2001 to roll out upmarket stores and exclusive jewellery lines. It opened its first store in London’s Old Bond Street the same year, although its launch was marred by a campaign launched by charity Survival International. This claimed that the brand’s diamond mining was displacing local bushmen in Botswana. It is thought that this is one contributing factor to the decision not to renew Iman’s contract.

The joint venture appointed the DDB Network to handle its global advertising account in May 2002 and Paris agency Louis XIV DDB was named as the lead agency. It is not clear if the company is still working with the agency.

The global De Beers account, which includes its Diamond Trading Company, is handled by J Walter Thompson, which did not pitch for the joint venture.