The recession has already changed the behaviour of both consumers and businesses. But a handful of rapidly growing companies believe one trend that has flourished during the recession will last long beyond the economic turmoil: bartering.

Barter companies, which broker deals between brands and media agencies, swapping surplus inventory for media space in the form of trade credits, have profited during the financial misery of the past two years.

Desperate times require desperate measures and thrifty firms have found that this method can help them purchase what they need for less.

Now, as the global economy recovers slowly, barter companies are evolving their business models to distinguish themselves and steal market share from one another. They seek to create value for brand marketers by offsetting the impact of big cuts in media budgets.

Marc Boyan, founder of barter company Miroma, gives an example of how such a deal might work. “Last year, one of our automotive clients had its $1m budget for outdoor advertising cut in half. The brand looks to us in that situation to protect its $1m budget.

“We asked the car marque for $500,000 in cash and $500,000 worth of unsold cars – effectively dead stock to the client. We then used media credits in our inventory to ensure the car brand got its $1m campaign and used those cars in a way that created value for media agencies.”

This “value” involved such enterprises as offering the new cars to media owners in order for them to replace their executives’ company cars. In return, the media owners passed Miroma a quantity of media credits.

This has also opened up further routes of business for Miroma, which operates mainly in the UK but has a division in Singapore. The company plans to use the fleet of saloons and hybrids it owns to launch its own private taxi service for media owners and agencies.

“We have the two clubs in London but we’ll probably have another ten or 12 in London by the end of the year,” says Boyan. “We are also looking at properties in New York and Las Vegas but that will come later.”

If that sounds a little overambitious for a company used to dealing in media rather than nightlife, Boyan insists his plan does make sense when viewed in context of how media owners need to spend their money.

“What do we have right now in our inventory? All sorts – TVs, watches, cars, hotel rooms and about $5m or $6m worth of TV, radio and online media space,” he says.

“The key to the whole thing is fuelling our ability to buy media space so we ask ourselves: ‘What is it that media owners want? What are their key costs?’”

One of those key costs that Boyan has identified is corporate hospitality. Boyan lives in New York and flies to London regularly for work. He reveals: “I tend to pay cash but have recently bartered my flights with a transatlantic airline through the clubs because the airline wanted a Christmas party. So I bartered £30,000 worth of flights for a party of that value.”

Owning clubs also means the business has a route to sell any excess drinks that may come from doing deals.

Such entrepreneurial thinking is not far from the core of many barter companies, according to Dean Wilson, the managing director of the UK operation of Active International, the largest bartering firm in the market.

Wilson says that barter works best in the food and drink, alcohol, automotive and consumer electronics sectors, but agrees with Miroma’s Boyan that there are deals to be made anywhere.

“We had a charity as a client recently,” adds Boyan. “It had excess phone software and systems after a refurbishment. We took it off the client in exchange for a credit on media space. We can later barter that software elsewhere. So we can take almost anything and work with anyone. From banks we can take underperforming assets or junk bonds.”

Both Miroma and Active International claim the period of the recession has seen incredible growth in the numbers and size of clients willing to see what they can get from bartering.

Boyan says Miroma had a $40m (£24.5m) turnover in the 12 months to June 2009 – a growth of 120% year on year. Active International, a much bigger company that operates in 11 countries, saw billings up 33% between July and December 2009, the first half of its current financial year. Forecasts for the second half of the year are up 38%.

“We still have to work hard to find a new deal but it has become easier in the past 18 months,” says Boyan. “People are a lot more pragmatic than they were.”

It is not hard to see why commercial directors, marketing directors and finance chiefs have been open to new ways of trading and saving money while retaining share of voice. But that was in a recession economy. What will happen to barter when better times return?

“The market may come back, but entrepreneurial companies that save people money will survive and create a strong platform for growth,” argues Boyan. He points to internet telecoms brand Skype and online music service Spotify as examples of companies that have built a sense of loyalty among users because of the savings they can offer users.

“A lot of this type of behaviour will remain. Everything will be a lot leaner following the recession. It has given people a kick in terms of how we look for opportunities and how we spend,” he says.

Wilson, who claims Active International trades with “21 of the top 25 media agencies and all of the top ten”, echoes Boyan’s view that businesses in the marketing services sector are now looking for different opportunities to trade. “We’ve placed media for 50 brands in the past six months, 20% of which were new to barter and all of which are high street brands,” he says.

But if barter is going to become an acceptable trading option, considered by the mainstream, it will need to shake off the remnants of what Boyan admits is a “dodgy reputation”. Wilson believes the sector will be boosted by the example of Omnicom Media Group hiring a barter specialist and taking it seriously. Omnicom appointed David Fletcher, previously at Active International as well as competitor barter specialist Astus, at the end of 2008 to co-ordinate barter across its network.

Wilson, himself a former sales executive at ITV and Channel 4, says: “Barter is still a growing business so a lot of our work is education. The brands and media owners are beginning to understand but it helps to have somebody within the agencies to allay client fears and provide valuable expert advice.”

It will also help to have some heavyweight cheerleaders behind bartering. Miroma recently signed a new non-executive director in Procter & Gamble veteran Bernhard Glock, who left the worldwide provider of consumer goods as its vice-president of global media and communication last September. Glock, who worked across numerous markets in his 24 years at P&G, will be responsible for guiding Miroma’s international expansion.

Glock’s experience of barter stretches back to his first P&G job in Germany. He recalls: “As a young manager, barter was an acceptable business model and was used to offer great value to advertisers, broadcasters and the agency world.

“But over time, we saw fewer barter deals. I was personally shocked that it had a bad reputation in the UK. If it is handled well and properly structured, barter can add astonishing value to all parties concerned.”

Glock says he looks forward to using his knowledge of people and commerce around the world to build Miroma’s business. Is he on a mission to improve the perception of barter too? “As an adviser to Miroma, I will tell them not to try to change the world. Do not worry about the companies who feel barter is not for them. Concentrate on those who understand the value and the process. They will spread the message.”

The acid test as to whether growth in barter can be sustained when the economy splutters back into life is whether brands still see it as a need. Stan Myerson, joint managing director of magazine publisher Northern & Shell, works closely with Miroma.

He claims: “Used intelligently and creatively, you can use barter to help plan strategic media campaigns. We’ll use it as long as barter specialists continue to bring ideas and innovation to the table.”

Taylor says: “With short-term budget allocation, I was able to use Miroma to take advantage of the market where unsold media could be bartered. Obviously, it works both ways, so I was also able to offer T-Mobile products at rates low enough to acquire new customers through Miroma.”

But Taylor warns clients should not see barter as a tool for cutting down figures on the balance sheet. The smartest brands should see barter as a way to create value, rather than simply as a quick way to prune costs.

He says: “When clients start seeing it just as a media discount, it stops working. There has to be some value for the media owner. The danger in procurement managers seeing barter as a way to bring down media costs is that it will reduce revenues to media companies – which will ultimately hike up rates and reduce discounts.” 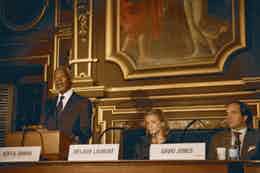 He’s the man who is marketing our potential future prime minister. But Havas’ David Jones has many missions, as Louise Jack finds out