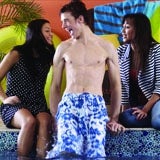 The sponsorship has been unveiled as Debenhams makes a trading statement showing underlying sales picked up over Christmas due to strong online growth, although store sales were weaker due to the winter weather.

Neighbours is watched by 5.4m average weekly viewers. The sponsorship will include idents after each programme and either side of the commercial breaks.

The break bumpers begin today (10 January) and will mirror the Neighbours’ credits and transform the show’s Ramsay Street setting into a British version, with each scene and character dressed by Debenhams.

The womenswear, menswear and childrenswear featured in the short films will be tagged in Debenhams’ stores and online with “as seen on TV”.

The sponsorship deal also takes in online, with a Debenhams logo Channel Five’s website, five.tv and holysoap.five.tv with a click through to Debenhams.com, in addition to branding on related on-air promotional trailers.

Debenhams TV will showcase each short film, linking to a dedicated Debenhams.com/neighbours web page and enabling customers to be able to instantly shop for what they’ve seen on television.

The partnership will be backed by a social media campaign including Facebook, Twitter, You Tube, Debenhams TV and blogs. The campaign was created by JWT.

The Neighbours cast will also be given the option to wear Debenhams merchandise during promotional trips to the UK.