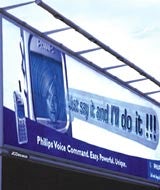 It is the first major change to the outdoor advertising cycle since 1988, and is likely to force JC Decaux’s competitors to follow suit.

JC Decaux is to test-run the new cycle in October and November on one of its national 48-sheet networks.

The company claims that, according to its research, the ten-day period is more effective for advertisers using outdoor than two weeks.

It will offer the cycle as an alternative to the traditional two-week campaign, charging an average of 20 per cent less than the market rate for a two-week campaign. If the trials are a success, JC Decaux may phase out fortnightly campaign cycles.

JC Decaux marketing director David McEvoy says: “This will suit advertisers who think outdoor is slightly too expensive for them, and those who want to make more than one burst in outdoor.”

JC Decaux’s research is backed by other outdoor specialists.

Posterscope managing director Steve Bond says: “This is something we support in principle. It may not work for advertisers who want to copy change mid-way through campaigns, but it will allow advertisers to buy more sites over a period of time.”