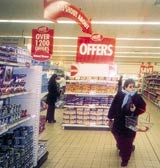 The so-called obesity time-bomb has become a hot topic in the national press in recent months. Growing concern that the UK will follow in the footsteps of the US, leading to a sharp rise in the level of heart disease and problems such as Type II diabetes, has been the subject of much debate.

The majority of the research that has been conducted into understanding obesity and the risk factors associated with the disease has been based on self-reported food consumption by obese patients. But little research has looked at what overweight consumers purchase from grocery stores and how the shopping habits of the average household have changed during the past decade.

Research from TNS Superpanel shows that there have been significant changes in the types of food purchased by consumers in the past 12 years. The total grocery market in Britain is valued at about &£69bn. Strong growth in the market has been driven since the mid-Nineties by the development of new product ranges and the move toward premium convenience food. There has been growth of more than ten per cent in the past two years alone, despite the increased focus by retailers on “everyday low pricing”.

The most significant change in grocery sales has been the increasing sales of pre-prepared convenience foods. The market has grown exponentially in response to people spending less time in the kitchen. In 2003, UK consumers spent more than &£1bn on chilled ready meals. Pre-prepared fruit and vegetables have shown similar growth, with annual sales increasing to more than &£500m in 2003.

With so many factors driving grocery sales since the early Nineties, it is difficult to pinpoint the impact which consumer purchasing has had on obesity levels. However, the TNS Superpanel data has enabled the Body Mass Index (BMI), which is calculated using weight (in kg) divided by the square of height (in m), of households across the UK to be matched with their grocery shopping patterns. The results have shown interesting differences in the types of foods purchased by high-versus-low BMI households.

The TNS data shows that the volume of groceries purchased by “obese” households is more extreme than their expenditure. This group is particularly attracted by “multi-buy” and “linksave” promotions. The lower socio-economic groups are able to use such promotional mechanics and discount retailers to maximise the volumes they buy while minimising the cost.

Despite these purchasing habits, when compared with households considered healthy, those classified as obese are more likely to respond positively to the statements “I am often on a diet to lose weight” and “I should do more about my health”.

In terms of what is driving behaviour within households classified as obese, these statements tend to indicate that while such families recognise that their weight issue should be addressed, this is not being translated into their day-to-day life. The alternative offer of health foods fails to ring true with this group.

It remains to be seen what the effect of the UK’s expanding waistline will be. Pressure on food suppliers and retailers to respond to changes in customer needs is going to increase significantly in the next decade. But while such companies can continue to develop healthier alternatives, manufacturers and retailers cannot force consumers to buy such products. The solution is going to require a cohesive approach from the food industry, the advertising world, health lobby groups and the Government.