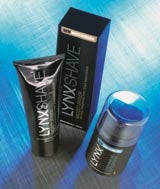 The future of Lever Fabergé’s Lynx men’s skincare range appears to be in doubt, following decisions by several major retailers to delist it.

Lynx skincare products were never taken by some retailers, such as Tesco, and have recently lost distribution through the Co-operative Group. An industry source says Lever’s “three tier” plan to dominate the male grooming market may have been too ambitious.

He says that the first tier of products – deodorants, body sprays and shower gels – have been very successful, but the second tier (shaving and skincare products) and the third (attempting to create retail outlets) have failed to take off. He adds: “Lever Fabergé found that if you stretch a brand too far, consumers lose interest.”

Since its launch in May last year (MW May 9, 2002), the moisturising line has struggled in a market dominated by Beiersdorf’s Nivea for Men. According to IRI, Lynx accounted for less than one per cent of sales in the &£10.8m men’s facial products market in the 12 months to June, with Nivea taking over two-thirds of the market.

The news comes at a time when Lynx has consolidated its control of the male deodorant sector. According to Lever Fabergé, the brand now takes over 60 per cent of male deodorant sales.