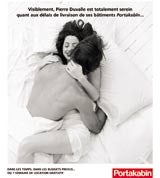 Those damned French, with their sultry accents, romantic culture and sexual freedom. They’re just constantly at it, aren’t they?

Take a look at this ad from France (right), for example, featuring a couple about to have sex. Even on the other side of the Channel you’d imagine that this must have some vague connection with some sexy product, no matter how tenuous the link. But the Diary is really struggling to understand the connection between two scantily clad, attractive people and Portakabin. Yes, that’s right, Portakabin.

After consulting a handy Tricolore textbook, the Diary has roughly translated the writing at the top of the ad as saying either “As you can see, Pierre Du Valle isn’t the least bit worried about his Portakabin building arriving on time” or “Xavier’s sister has four apples”. The link was obvious really, wasn’t it? But that’s the French for you, yet again putting us uptight Brits to shame.

However, on closer inspection it transpires that the agency behind the ad is McConnells Advertising, which is based in that well-known romantic hot-spot, Derby, and beat two French agencies to clinch the Portakabin France account with its sexy images. “Derby: the city of love” has quite a ring to it, doesn’t it? It surely can’t be long before star-cross’d lovers are walking along the banks of the Derwent, sipping vintage Buxton water and falling in love to the strains of the Crazy World of Arthur Brown.