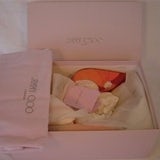 Following hot on the heels of Alfred Dunhill’s announcement that it is reviewing its digital marketing and hiring a new ecommerce manager (MW last week), Jimmy Choo is expected to start selling shoes online in the coming weeks. It is a sign that luxury brands are finally taking the internet seriously as a marketing and sales platform.

Other recent developments include Givenchy appointing digital agency Skywire as its interactive marketing agency in April. Further afield, diamond specialist Tiffany &amp; Co launched a website for the key Chinese market at the end of last month, underpinning its strategy of opening more shops in the Far East. Tiffany is not selling online to the Chinese yet, but could well decide to do so in the future. It has been enjoying what it calls “substantial growth” in online sales to customers in various countries in recent months.

There have been similar spurts of activity in the sector before, with some groups more active than others. One example is LVMH, which launched its eLuxury.com portal. Overall, though, e-commerce and marketing to support it has been patchy. “People who run luxury brands have a very elitist view of the world,” says Peter Matthews, managing director of agency Nucleus. “They’ve been very slow to take up the opportunities online, partly because they felt the internet wouldn’t be used by luxury consumers, that it would be somehow beneath them.”

Such an attitude is misguided, according to Steve Vranakis, head of digital at ad agency Vallance Carruthers Coleman Priest. “The product itself is intrinsically higher-value. The best thing it could possibly do is move online – everyone can see it, but not everyone can afford to buy it.”

It is not only snobbery that has led luxury brands to shun the Web. The medium can also be disruptive to business models. Luxury brand-owners do not believe in price parity – US customers tend to get better deals, while Asian consumers often pay a hefty premium – and they did not want that fact exposed by a globally accessible website.

On the flip side, it is a cost-effective way of reaching customers without the expense of an extensive network of shops. Luxury brands have always been under-distributed. Dunhill, for example, has just one shop in the UK, one in the US and none in Germany or Italy. While it has a wider network in Asia, it has been struggling to find customers – recently, it has been the slowest growing part of the Richemont empire.

According to Marc Cohen, director of Ledbury Research, which keeps tabs on the rich, they are more likely to be online than any other group – and spend more money there, too.

“The most important trend over the past year has been the huge growth in the number of people buying clothing online, and this is very much the case at the top end,” says Cohen. “Lots of luxury brands are taking a more serious look at their websites now and, at last, quite a number are offering the ability to purchase online.”

Exclusivity is part of the appeal of luxury brands, and too many outlets can damage their cachet – what’s become known as the “Burberry effect”, when the label spread itself too widely and was adopted by chav culture. But there is a balance to be struck and the luxury sector is at least making an effort.