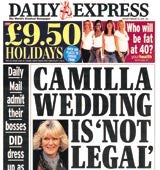 Northern &amp; Shell (N&S) group marketing director Tim Pemberton has left the company after less than six weeks in the job. He is not thought to have a job to go to.

A spokesman says that Pemberton has left the group by “mutual agreement”.

Pemberton was recruited from Carat, where as strategy director he worked on News International publications, with a brief to oversee Express newspaper titles, N&S’s magazine portfolio and The Fantasy Channel.

He took up the group marketing director position after Roland Agambar joined News International last year as marketing director for News Group Newspapers, working across The Sun and News of the World (MW October 21, 2004). Pemberton has previously worked at CIA, Walker Media and WCRS.

N&S is preparing to launch two new magazines in the next few weeks supported by advertising campaigns. Take5 will be a weekly television listings magazine spun out of Daily Star Sunday and Happy will be a monthly shopper title. Pemberton was to oversee the launch of the two titles.

Express Newspapers moved its &£9m media account for the Daily and Sunday Express out of OMD UK and into MindShare without a pitch in January before Pemberton joined (MW January 6). Latest Audit Bureau of Circulations figures show the Daily Express up 5.62 per cent for January on December to 949,238 and the Sunday Express up 5.08 per cent to 976,055.

The publisher is still awaiting a ruling from the Office of Fair Trade regarding Associated Newspapers’ distribution agreement with London Underground before launching a free afternoon newspaper in London.