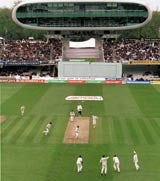 The Marylebone Cricket Club (MCC) has signed up Deutsche Bank as the first sponsor of Lord’s Cricket Ground.

Deutsche Bank will hold sponsorship rights to the perimeter boards at all games played at the ground, including those played by the England team.

Deutsche Bank will also be able to use Lord’s and its facilities for corporate hospitality and product launches, and for advertising and promotional events.

MCC is now searching for companies in other business sectors to join Deutsche Bank. The MCC created a new brand identity for the Lord’s Cricket Ground last year, to attract potential sponsors (MW May 1, 2003).

MCC head of communications Iain Wilton says the club is already in talks with a potential insurance partner. The club is unlikely to seek a telecoms partner, given Vodafone’s involvement with the England team.

The MCC will use the sponsorship income to improve the ground, including a project to restore the pavilion, as well as launching initiatives to encourage young people to attend cricket matches.