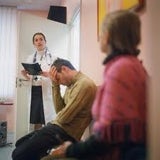 In September, the Government approved the activity that aims to alert people to the early signs of cancer and encourages them to get checked out.

It invited MCBD, M&C Saatchi and VCCP to pitch for the work.

The campaign will be launched in January next year, and has been approved by the Cabinet Office.

Activity will consist of 59 local campaigns focusing on breast, bowel and lung cancer. Local areas have been given a share of the £9m for their campaigns.

At the same time as running these local projects, the Department of Health will be trialling, in two regions, centrally-led campaign activity to raise awareness of bowel cancer symptoms and to encourage early presentation. Subject to evaluation, the campaign will be introduced nationally.

The work has been approved, despite the advertising freeze, because the Government believes that much of this gap in survival rates could be filled if it could get cancers diagnosed earlier.