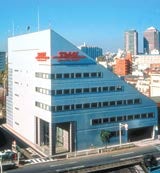 Haulage and courier company DHL is tipped to appoint Ogilvy &amp; Mather and Mediaedge:CIA to handle its &£40m global advertising and media business.

The review was overseen by DHL’s Brussels office. In Europe the advertising was handled by DDB’s Paris office and through BMP DDB in the UK while Mediaedge:CIA was the incumbent on the majority of DHL’s European business, including the UK. Incumbent networks including Young &amp; Rubicam, DDB and Carat are understood to have pitched for the business.

The review has been overshadowed by last week’s crash which saw a DHL plane collide with a Russian passenger jet killing 71 people – mostly teenagers and children – over the Swiss/German border. Senior executives are understood to have put any announcements on hold as a result of the tragedy.

DHL is one of the largest companies in the international air express industry linking more than 120,000 destinations in 228 countries and employing 71,000 people.

The company is beefing up its sports sponsorship. As well as being the England team’s official carrier at last month’s World Cup, earlier in the year it signed up to sponsor Jordan’s Formula 1 team in a &£63m three-year title sponsorship deal.