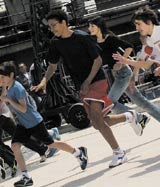 Sportswear brand Diadora has been forced to pull its latest European ad campaign because it uses horrific pictures of the 1985 fire at Bradford City football stadium. The Italian sportswear company has already withdrawn the ad and has apologised to Bradford City and angry viewers.

The ad, called The World Needs To Play More, is part of Diadora’s 2004 brand campaign, which is supposed to have an anti-violence theme. It starts with scenes of war-ravaged countries before cutting to images of the blazing stadium. A voiceover says: “Better 90 minutes of play than a minute of silence”.

The fire, which broke out on May 11 1985, killed 56 fans and injured more than 300 after rubbish under the stadium’s wooden terracing caught fire and quickly spread.

The Bradford City website and the brand were both swamped with complaints about the images.

Diadora says that the images were used following a mix-up in production. It requested images of non-accidental violence from an image bank but the images of the Bradford fire were inserted instead in error.

A statement made by Diadora’s Italian head office says that the archive images of violent moments from the past and the present were supposed to be a call for peace.

The brand also confirmed that it would be the football club’s technical sponsor for the 2004/05 season, which it hopes will further confirm that the images were inadvertently used.