The drinks maker, which reported flat sales across Europe and a slowdown in emerging markets in its latest quarter, is expecting the flurry of activity to accelerate the growth of its top premium brands. It cites expanding its global footprint, product offering and innovation pipeline alongside delivering better margins, robust supply chains and targeting new consumer groups as key channels for future growth amid the recent sales slowdown.

The developments include launching new brands, exploiting new drink occasions to reach younger consumers as well as investing more in making its drinks part of popular culture. This approach was echoed last month when the business struck a media tie-up with ITV’s Jonathan Ross Show.

Diageo signalled Guinness as one of the key beneficiaries of the changes in a bid to “reignite growth” of the stout. Despite its growing popularity in Africa, Guinness has struggled in more mature markets in recent years as consumers turn to alternative drinks. The brand is set to be “reframed for the next generation” through increased marketing around football and rugby alongside a greater focus on mobile marketing.

The strategy refresh will serve as the cornerstone of Diageo chief executive Ivan Menezes’ tenure after replacing Paul Walsh in July. Changes to how the business promotes its brands moving forward were first hinted in the summer when it revealed it would reduce its below-the-line activity and increase media spend to drive savings.

Menezes says the company’s new “performance ambition” is for Diageo to be a “global leader with the ambition and capabilities to achieve more”.

He adds: “Diageo hasn’t translated its industry-leading brands and branding skill into shareholder value. Changes have happened but it is still a ’show me’.”

Elsewhere, the company revealed it will slow down its acquisition activity in emerging markets after spending £3bn on deals over the last four years. 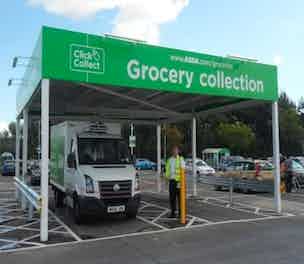 Asda is taking its click-and-collect service to tube stations across London for the first time as part of a wider charge to expand its collection service to areas not currently served by its stores and increase its presence across the capital.