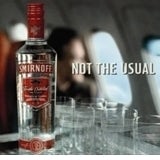 Diageo is testing a new Smirnoff-branded alcoholic sparkling water in the US as it steps up the search for a successor to Smirnoff Ice.

Smirnoff Source comes in two variants – Pure Citrus and Pure Orange – and is a lightly carbonated mix of spring water, natural flavours and malt alcohol with an alcohol by volume level of 3.5%. It is understood Diageo North America will test-market the product in Texas.

If the drink proves popular, it is expected to be rolled out across the US and then introduced to the European market, including the UK.

Diageo previously dominated the US market for flavoured malt bevarages or “malternatives” with its Smifnoff Ice brand, but in recent years it has lost market share to new brands such as Boston Beer Co’s Twisted Tea, an alcoholic iced tea. Diageo has already launched its own version, Smirnoff Raw Tea, which is currently being marketed through a viral parody-style video featuring white, upper-class rappers.

Drinks industry experts say the latest “malternative” launches aim to expand the category, which has traditionally appealed mainly to younger women. The newer products are less sweet and are being marketed more in line with beers.

Malternatives are the US equivalent of flavoured alcoholic beverages (FABs) – or alcopops – in the UK and Europe. The key difference between the products is that FABs are spirit-based whereas “malternatives” use beer as a base. This enables manufacturers to get around licensing laws so the drinks can be sold in outlets with just a beer licence.