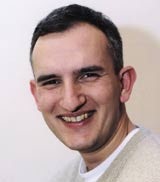 Diageo Great Britain has appointed Russell Jones as marketing director for Baileys. He joins from EMAP, where he was the brand director for EMAP Performance, the multi-media music division.

Jones, a former Smirnoff marketing manager, will report to Diageo GB marketing director Andy Fennell. His remit will also include the Gordon’s and Pimm’s brands.

Marketing Week predicted earlier this year that Jones would be considering his future at EMAP, after EMAP Performance group marketing director Malcolm Cox left without a job to go to following a restructure of the radio division (MW March 11). Jones joined as youth brands director of EMAP Performance in May 2000, before being promoted to brand director two years later.

Jones replaces Wendy Darlington, who leads the Baileys global brand team. Prior to joining EMAP, Jones held various sales and marketing roles at Diageo from 1990 to 2000. His last role was as marketing manager for Smirnoff.