Diet Coke sales have overtaken classic Coca-Cola with sales figures showing that the low-sugar variant’s rebrand has had an impact, although the company still faces the challenge of returning to long-term growth.

The soft drinks giant saw an instant boost in Diet Coke sales in the week after the rebrand, with sales hitting £10.9m in the week ending 24 February 2018, ahead of sales of classic Coca-Cola at £10.76m, according to figures from market research company, IRI.

This trend continued into May, with Diet Coke value sales hitting £13.7m while classic Coke was at £11.4m in the week ending 19 May, highlighting the growing sales gap between the two.

Carl Carter, head of media and connected consumer solutions and innovation at IRI, says: “Since February there has seen a significant shift of shoppers switching into Diet Coke, which has seen major volume gains away from Coca Cola’s standard variant.”

Coca-Cola has also seen its total sales return to growth. The figures show value sales were on a gradual decline over 2017 (ignoring a big leap at Christmas). However since the end of January they have returned to growth. 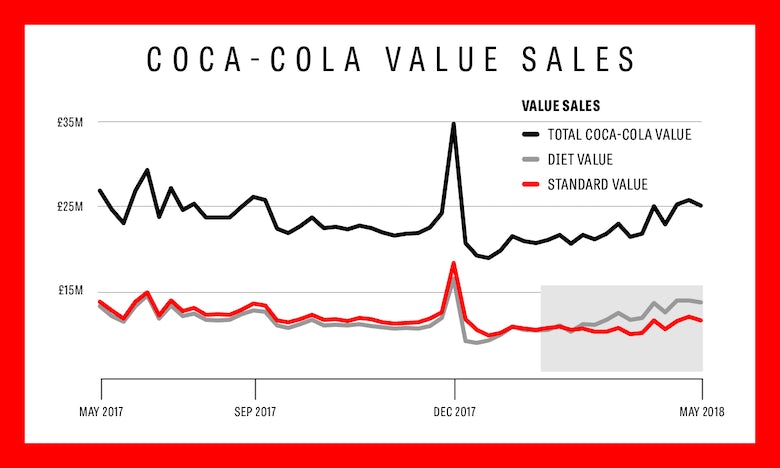 The rebrand and shift in focus at Coca-Cola is also having an impact on consumer perceptions of the products. YouGov BrandIndex data shows that Diet Coke’s Impression score, which measures if people have a more positive or negative feeling toward the brand, has risen by seven points since the beginning of the year to a score of 57; that is also the highest it has been in 12 months.

People are also hearing positive things about the brand. Diet Coke’s Buzz score, a balance of positive and negative consumer views, currently stands at 14, a rise of five points.

Looking at how the brand’s perception is holding up compared to the competition, Diet Coke’s Quality score of 11 sits six points above Pepsi on a score of five and Diet Pepsi on two. Diet Coke is also top of the ‘carbonated drinks’ sector in terms of Purchase Consideration with a score of 22.

Diet Coke rebrand has an impact

The results come after the soft drinks giant heavily invested in rebranding Diet Coke in the UK. That involved a packaging redesign, a £10m advertising campaign and the introduction of new flavours including exotic mango and feisty cherry. The sleeker, slimmer cans with a new logo began rolling out in stores earlier in the year, with the campaign launched in mid February.

That advertising campaign was targeted at millennials, with the television spot telling consumers to do what they want “because I can”. This was supported with activations including bus advertising and digital marketing.

Aedamar Howlett, marketing director for Coca-Cola GB and Ireland, told Marketing Week at the time: “What’s slightly different this time round is our investment is flipped slightly differently because it’s not only about continuing [to connect to] our VIP brand fans but recruiting a new generation.”

The impact of this can be seen in both value and volume sales of Diet Coke and Coca-Cola. Volume sales of both variants tracked very similarly in the months before the sugar tax but then begin to diverge, with Diet Coke volume sales increasing and classic Coke sales generally declining. 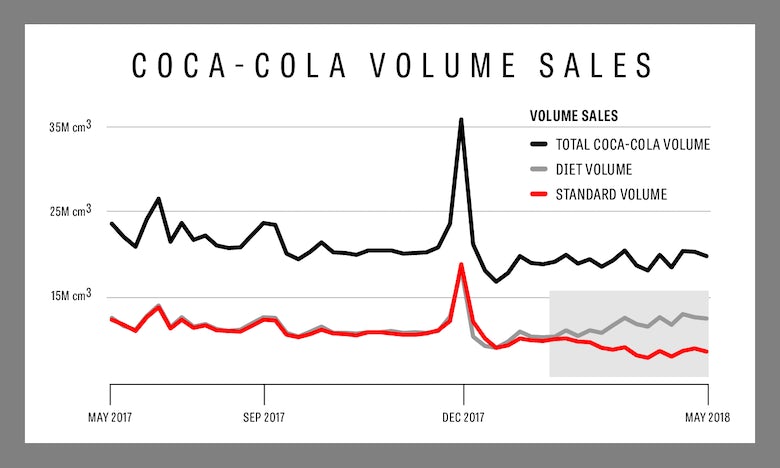 IRI’s Carter says: “This volume gain can be associated with both the major focus on sugar reduction in the UK from government and the new Diet Coke media campaigns, with shoppers and consumers being bombarded with messages and responding accordingly.”

“Our new Diet Coke flavours are performing well and are attracting new drinkers to the brand. Since launching in April, the new flavours have generated more than £7m in sales value.”

A small victory for Coca-Cola

The figures are a positive sign for Coca-Cola, proving that heavy investment into its low-sugar variants has, at least initially, paid off. The IRI figures show that while classic Coke sales by volume have declined since the focus at Coca-Cola shifted to promoting Diet Coke, this has been offset by the price increase, meaning that its value sales are up. Couple that with growing Diet Coke sales and the business seems to be navigating the changes in consumer tastes and sugar tax better than expected.

However, sales are still down year on year, suggesting it will increasingly need to find other ways to shore up its business outside fizzy drinks. And while YouGov’s figures show the advertising campaign has had a positive impact on consumer perceptions, building that into long-term loyalty and growth, as Howlett intended, is still a challenge.

IRI’s Carter explains: “Our opinion is that Coca-Cola volume has continued to decline year on year so that actually the change in formulation hasn’t changed that trend. What is has done is change people’s shopping habits. But has it changed Coca-Cola’s performance? From our point of view, no.”

The challenges do not stop there. Coca-Cola now has to compete with brands beyond its core competitors, with challenger soft drink brands, and flavoured waters and teas increasingly vying for consumers’ attention and money.

Coke is aware of this and the company has an objective that 50% of its revenue growth in Great Britain will come from innovation by 2020. It has already launched a number of new brands in the UK this year, including fruit drink Fuze Tea, to reduce its reliance on Coca-Cola.

However, as PepsiCo’s recent results highlight, the carbonated soft drinks market is waning, with Coke’s competitor relying on snacking to equal out its results.

Coca-Cola should be pleased it has navigated a very difficult start to 2018 well, but turning that into long-term success is not a given.