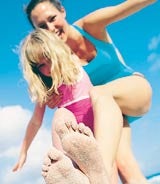 Sheffield-based Dig For Fire won the business after a four-way pitch against unnamed agencies. It is not known whether Soup, the launch agency for Blue Sky, repitched for the business. The pitch was overseen by managing director Simon Russell.

Blue Sky claims to be the first UK travel operator to segment its brochures by holiday lifestyle, such as activity or lazy, rather than destination. The holiday products are aimed at families and older couples. Thomas Cook believes that direct selling will become a growing trend in the package holiday sector and estimates that it accounts for ten per cent of the total market.

The brand linked up with Associated Newspapers for a heavily flagged holiday promotion with the Daily Mail and The Mail On Sunday last month.

Dig For Fire was formed from the merger of direct marketing agency Scope and full-service agency Paradigm last month. The agency, which has 85 staff, handles business for First Direct, HSBC, Toyota and Express by Holiday Inn.