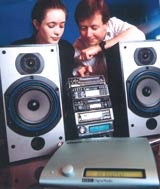 The excitement surrounding digital radio may have cooled, but the ever-optimistic radio industry believes next year will be significant for the development of the medium.

Dig a little deeper, though, and it is evident that a much work is still needed to really get the medium off the ground.

The number of digital sets in the UK is forecast to rise from the current 40,000 to – a still modest but more significant – 200,000 by the end of next year as the technology improves and the cost of the sets falls. At the moment, consumers can expect to pay about £300 for a digital radio hi-fi unit.

Portable mains-powered digital radios will go on sale next month. These will initially cost about £400 but are expected to halve in price over the next year.

Digital radios incorporated in CD players and standalone units the size of cigarette packets will be next, costing £100 to £200 – seen as significant price barriers in the attempt to make the medium more mainstream.

But some fundamental changes in the radio market are still a way off. Ford says it has “no fixed timescale” for installing digital radios in its cars, and it is likely that they will, at least initially, be an optional extra.

Given the present economic climate and the downturn in radio advertising, launching digital radio is a heavy burden for commercial stations. Last month, Capital Radio posted a full-year fall of six per cent in advertising revenue, GWR predicts a fall of 3.5 per cent for the half year to November and Scottish Radio Holdings said yearly revenues had fallen by three per cent.

But Quentin Howard, chief executive of digital operator Digital One, says the radio industry needs to hold its nerve.

He says: “These are difficult times for radio stations, but they have to hold fast and not compromise their digital products. It’s important we don’t cheapen the medium. When times are difficult people look at their bottom line, but digital is a long-term commitment.”

Next year will see the launch of the BBC’s five standalone digital radio stations, which were approved by culture secretary Tessa Jowell last month. These should kick-start a concerted and welcome marketing effort by the BBC, including cross-promotion on the corporation’s FM stations.

BBC Radio &amp; Music new media liaison manager Rachell Fox says digital has been a big commitment for radio stations: “In the mid-Nineties, manufacturers were saying they would only make the equipment when broadcasters are producing stations. Our new stations and advertising will be a clarion call to manufacturers.”

A concerted marketing effort will be needed to persuade the public of the advantages of the technology. The six-month old Digital Radio Development Bureau (DRDB), which is charged with this job, admits there is much to be done to get even retailers to understand the technology.

DRDB chief executive Terry Scicluna says: “There is confusion among retailers about what digital radio is. Many think that analogue radios with LCD screens are digital radios.”

There is also continuing caution from the advertising industry about digital radio. MindShare head of radio Howard Bareham says it could be another four years before digital radio becomes a viable advertising medium.

“What is the benefit of changing to digital radio? At the moment I don’t see one. Advertisers want audiences, but 40,000 sets isn’t many.

“Potentially things will change when digital radios are installed in cars. But it remains to be seen whether radio companies can sustain their development of digital.”

Capital Radio digital development director Mark Frost says the company remains committed to digital. But he admits that the radio industry needs to give a clear message to the public about the advantages of digital radio, without necessarily focusing on sound quality as the main advantage.

He says: “It’s very difficult for people to fathom what is so great about digital radio. A lot of people still listen to AM, so is the quality of digital the right pitch? People need to realise there are six times as many stations on digital.”

Frost acknowledges that the BBC will be a “powerful player” with its promotion of digital radio, but believes the corporation’s new stations could damage those commercial stations producing similar output because “the BBC will be coming in with a pair of size tens”.

Another significant step was this month’s announcement that Virgin Radio is using the LCD screens on digital radio sets to promote the National Geographic Channel. Moves such as this highlight the change that is likely to take place in radio advertising. If digital takes off, it will be a big market for advertisers, with 160 digital stations coming over the next few years. There will be ten national commercial stations – as opposed to the current one national commercial FM station, Classic FM – and ten national BBC stations.

Howard admits the industry still has its work cut out to educate media buyers: “It’s a process we should start over the next year, so media buyers can tell us how they want it to work.”

The advent of digital will be an extremely testing time for radio companies. The mainstream development of the new medium is getting nearer but in the present climate still seems agonisingly far away.