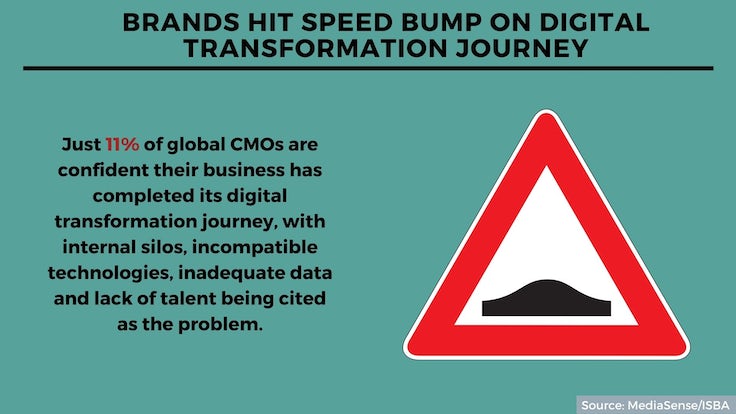 Just 11% of global CMOs are confident their business has completed its digital transformation journey, with internal silos, incompatible technologies, inadequate data and lack of talent being cited as the problem.

Currently 82% of brands are in the process of transforming their internal media operating model, with 76% planning or undergoing a transformation of their external agency model.

In-housing is on the agenda for many, with 55% planning to bring more functions and talent in-house, with 56% believing the skills shortage is holding the industry back.

With brands trying to find a better balance between brand and performance marketing, measuring effectiveness is becoming a growing concern. Two-fifths (42%) believe cross media measurement will never be realised, while nearly half (49%) cite ‘self-interest’ as a limiting factor.

Some 46% expect attention to shift to sustainability and measuring the environmental impact of media. 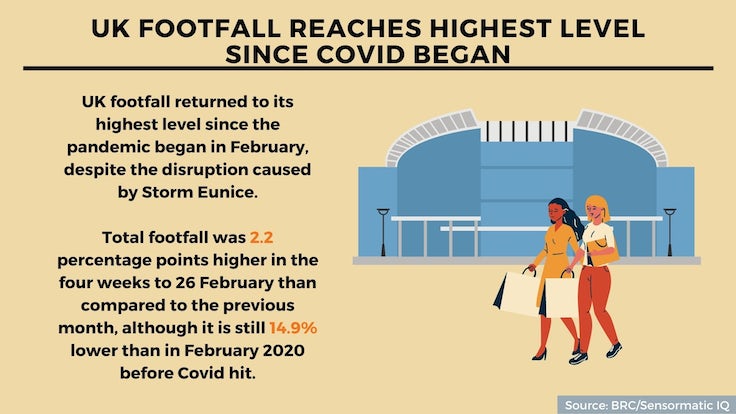 UK footfall returned to its highest level since the pandemic began in February, despite the disruption caused by Storm Eunice.

Total footfall was 2.2 percentage points higher in the four weeks to 26 February than compared to the previous month, although it is still 14.9% lower than in February 2020 before Covid hit.

The data from the BRC and Sensormatic IQ shows footfall on the high street saw the biggest improvement at 4.8 percentage points higher than in January. However it was still 19.4% lower versus two years ago.

However, she warns that challenges remain given consumer confidence has been severely knocked by rising inflation. 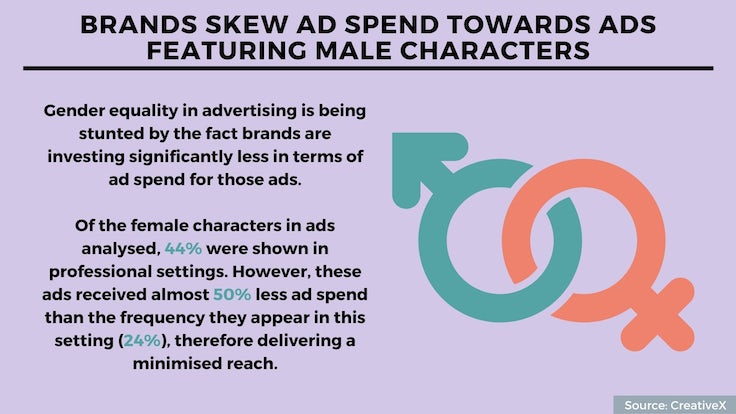 Although more female characters are featuring in ads, gender equality in advertising is being stunted by the fact brands are investing significantly less in terms of ad spend for those ads, meaning fewer consumers will see them.

Analysis by CreativeX and the Geena Davis Institute on Gender in Media shows that while marketers are making more progressive choices about how female characters appear in their ads, they are still investing more money on ads that feature male characters and traditional gender roles.

The analysis of more than 3,400 ads across YouTube, Twitter and Amazon, totalling $836m in ad spend in the US, shows more than half (58%) feature a female character, compared to 41%, which show a male character.

Of the female characters in ads analysed, 44% were shown in professional settings. However, these ads received almost 50% less ad spend than the frequency they appear in this setting (24%), therefore delivering a minimised reach.

On the flip side, 41% of characters in professional environments were male, receiving almost double the ad spend (49%).

Anastasia Leng, founder and CEO of CreativeX, says: “Our research highlights that brands are unintentionally alienating their audiences through storytelling that is male-oriented and traditional in its gender portrayal. Marketers’ intent and their actions are not lining up, and this gap will continue to widen unless we build in systematic and objective ways of monitoring our content representation efforts and progress.“ 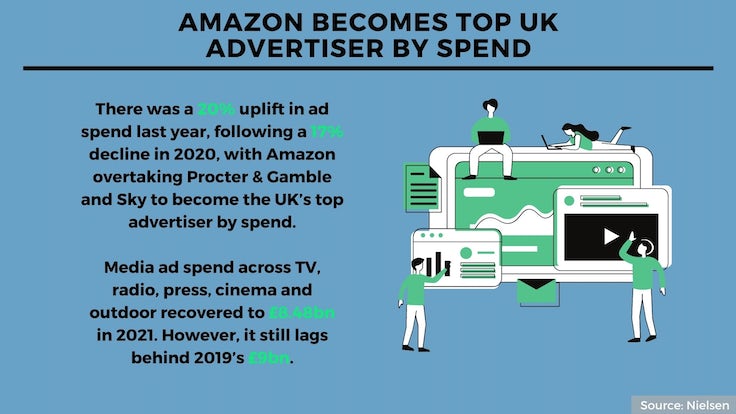 There was a 20% uplift in ad spend last year, following a 17% decline in 2020, with Amazon overtaking Procter & Gamble (P&G) and Sky to become the UK’s top advertiser by spend. P&G and Sky move into second and third place, respectively.

The categories with the most significant spend increases were computing, retail, travel and transport, entertainment and leisure, and finance.

FMCG giant P&G was the top TV spender over the year, followed by Sky, Unilever, Reckitt and Amazon.

Peloton was the UK’s top spender on digital display advertising last year, followed by Amazon, Ebay, Hello Fresh and Marks & Spencer. The latter is the only brand in the top five to make the majority of its sales through physical retail sales, while Peloton, Amazon, Ebay and Hello Fresh are considered digital-first brands.

While digital display’s overall ad spend for the year was not reported by Nielsen due to changes in methodology, the analytics firm said it had experienced “significant growth” over 2021. Entertainment and leisure, computing and finance continue to lead in the space, with a combined revenue of over £1bn.

Retail prices mark highest rate of inflation in over a decade 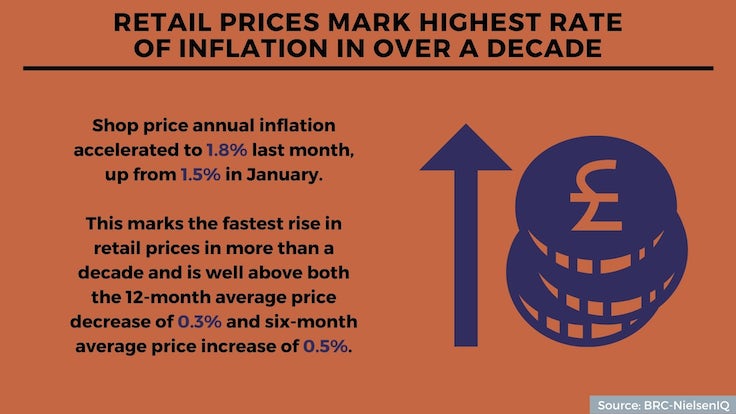 Shop price annual inflation accelerated to 1.8% last month, up from 1.5% in January, according to the latest BRC-NielsenIQ Shop Price Index.

“Retail prices rose in February at their fastest rate in over a decade,” explains CEO of the British Retail Consortium, Helen Dickinson. “Food inflation remained the key driver behind higher prices, particularly for fresh food which has been impacted by poor harvests, both in the UK and globally.”

She notes the increase from last month is a result of rising prices for non-food products, particularly health, beauty and furniture. The BRC CEO warns there is little sign of change, with the Bank of England predicting price rises to continue until at least the spring.

Dickinson adds that price rises will be “unwelcome news” for households already struggling with the rise in national insurance tax and energy price caps.

“Retailers are going to great lengths to mitigate against these price rises and support their customers, for example, many supermarkets have expanded their value ranges for food. Unfortunately, there are limits to the costs that retailers can absorb,” she says.