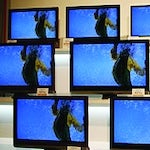 The rise over the last two years points to the increased popularity of non-terrestrial channels, and the appeal of HD services available on satellite and digital terrestrial platforms (DTT). BBC One HD is due to launch on DTT this autumn.

Ofcom’s latest report shows that take-up of digital television in UK households has risen by 2.9% in the past year, with 92.7% of UK households now owning a digital TV, up 0.7% on the first quarter of 2010.

Ofcom estimates each home owns an average of 2.4 TV sets, equating to 35m secondary sets in the UK.

On additional sets, DTT services such as Freeview, are the most widely used platform, connected to over half of secondary sets.

Satellite services, both paid for and free services, collectively hold the largest share of the main set with 43%, followed by DTT with 39%.

The report show that 80% of all TV sets had converted to digital television by the end of June, up 11% on two years previously.