1. Joy by Dior – The new fragrance

Dior’s campaign for its new fragrance Joy, featuring actress Jennifer Lawrence, is everything you might expect from a high-end brand – it’s sleek, it’s aesthetic and it’s glossy. Set in the garden of a luxury home in Los Angeles’ Hollywood Hills, the ad is set to classic Rolling Stones tune ‘She’s a Rainbow’, which also featured in Apple’s ad for its iMac Colours in 1999. Throughout the slow-motion scene Lawrence is seen swimming under water in a flowing white gown before basking in the sunshine.

Apple has covered a season’s worth of major product launches in 108 seconds in this fast-paced, dynamic and jam-packed advert. Opening with the phrase, “this is big”, the ad showcases the tech giant’s latest products, such as the iPhone XS and iPhone XS Max. Apple uses the erratic video to showcase some of the products’ key features such as their A12 bionic chip, durable glass, stereo sound and water resistant capabilities. The ad doesn’t stray too far from Apple’s usual characteristics and also features a snippet of Odesza’s song ‘Loyal’.

Has a vehicle ever given you the impression that you’re travelling through time? In Fiat’s 1960s-themed ad, a young couple experiences the future first-hand aboard the company’s new 500X model which, according to the ad, can time-travel. Paying tribute to Hollywood movie Back to the Future, the couple is transported to the present day when their classic Fiat 500 is struck by a bolt of lightning before morphing into the new modern vehicle. The surprised couple take off in their new Fiat leaving a trail of flames and dust in their wake. They then try to make sense of the car’s seemingly futuristic tech features, which include an inbuilt mobile service, map and blind spot alert. The man can be heard saying: “I think this is a spacetime navigator”.

4. Apple’s iPhone XS — Everything to know in 54 seconds

Do you really know the iPhone XS? Probably not, which is why Apple has also unveiled a shortened version of its ‘Big news in 108 seconds’ ad (see above). Within this whirlwind breakdown of the phone’s features, the tech giant opens the film with “welcome to the big screens”. The advert is everything Apple embodies, it’s fast and sleek while showing off almost futuristic features.

“Don’t ask if your dreams are crazy. Ask if they’re crazy enough,” is the main theme of Nike’s ‘Dream Crazy’ campaign. Featuring Colin Kaerpernick, the campaign itself caused quite a stir with consumers split over whether this particular advert was the right way to go. For many, Kaerpernick is someone to admire for standing up for racial injustice. For others, his decision to ‘take the knee’ during the national anthem at NFL games is disrespectful. Kaerpernick narrates the video which pays homage to 16 athletes young and old, including Serena Williams, who have overcome adversities within their lives to defy the odds and be where they are today. 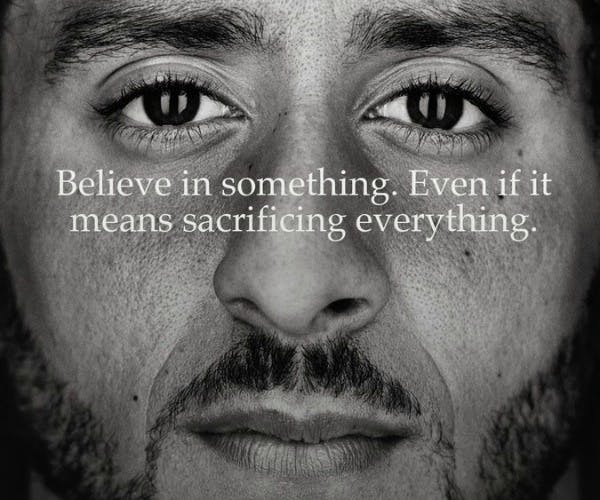