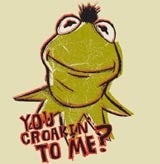 Disney kicks off the relaunch of the Muppets next week, with a range of t-shirts designed by celebrities including Robert De Niro and Quentin Tarantino andmark Kermit the Frog’s 50th birthday.

The celebrity-designed t-shirts will be auctioned on DisneyAuctions.com to raise money for charity.

Disney plans to pump millions of pounds into the Muppets, through its subsidiary The Muppets Holding Company. The company has just relaunched the first series of The Muppet Show on DVD in the US, through its Buena Vista arm, and plans a major UK push for Muppets-related products in the autumn.

As well as re-releases of the series and films, there will be launches of Muppets video games, online and mobile phone content, clothes ranges and toys. Walt Disney International UK and Ireland vice-president of marketing Tessa Moore, who is co-ordinating the Muppets UK relaunch, says Disney has “huge plans to deliver Muppets content across all platforms”.

Moore says there are no plans to appoint an advertising agency to handle the Muppets relaunch, but does not rule it out. Moore adds that Miss Piggy and Kermit could star in advertising in the UK for major brands. “Thanks to their irreverent personalities, we could use the Muppets to sell products that you might not usually associate with Disney characters.”

Vimto has launched a newly designed version of its 250ml sports-cap bottle, which will be in shops in time for the start of the new school year. The single bottle will be available at a recommended retail price of 55p, with the multi-pack priced at &£1.49. The new ready-to-drink bottle is ergonomically shaped to fit […]

The future of Charlton Athletic Football Club’s relationship with shirt sponsor Allsports has been thrown into doubt following the sporting-goods retailer’s financial difficulties. The four-year deal, which is worth several million pounds, expires at the end of this season and sources say it is unlikely to be renewed after a breakdown in relations. It was […]