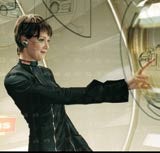 Dixons Group has launched a review of its media and advertising across Europe.

Elizabeth Fagan is being moved from her role as managing director of The Link to that of marketing director across the group with responsibility for a group-wide media and advertising production review.

This is a return to a central marketing role for Fagan, who was marketing services director before taking charge at The Link.

A spokesman says: “The job is to look at the whole process across the entire group and to see if any synergies can be put in place on a European scale.” In the UK, Dixons uses Walker Media for media buying and M&C Saatchi for creative work across PC World, Dixons, Currys and The Link. Last year, it spent &£97.8m in the UK. It is thought that the group uses several agencies across Europe.

The spokesman would not be drawn on whether the review, which he says is “currently internal”, will extend to a full-scale agency pitch.

The move follows the news that Dixons this year put its UK marketing and advertising budget under the microscope as part of an initiative to cut &£30m of costs from the business (MW June 30).

Last month, Dixons announced that it was laying off up to 800 staff across the business as it rationalises distribution depots and information systems.