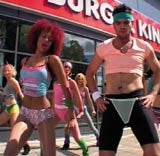 The axe has fallen on nine staff – 5% of the workforce – at Delaney Lund Knox Warren &amp; Partners (DLKW), and the redundancies have raised questions about how much pressure is being brought to bear on the agency’s bosses by its owner, listed marketing services group Creston (MW last week).

When Creston bought the agency in a deal worth &£38.2m early last year, half the fee was reliant on the agency reaching set performance targets during the subsequent three years. DLKW had won ten pitches in 2004, adding &£54m to its billings, and spent 2005 in much the same successful vein. Winning 11 new accounts, including SCA Hygiene’s &£35m Tena business, boosted the agency’s reputation, and allowed it to hire 83 staff.

But the redundancies came as a surprise to the industry. The view that Creston had much to do with the cull is held by several sources, including one who says: “Creston will have a deal with the agency to reward those at the top with a certain amount of the profit the agency is making. No one blames DLKW, but earn-outs can make you selfish.”

The notion that the redundancies involved Creston is denied by the group itself and DLKW. Both parties claim the losses followed client Burger King’s consolidation of its business into US agency Crispin Porter &amp; Bogusky, leaving DLKW with only promotional work. Coupled with the loss of Premier Foods’ Branston range, the result was a combined &£1.1m reduction in income. Chairman Greg Delaney says the agency chose Creston as a buyer because of its “non-interventionist style of ownership” and insists the redundancies were a business decision.

But one industry source labels the cuts a “daft, short-term decision” and that with DLKW’s more successful long-term record, it will soon have to rehire the nine staff, and more. Delaney counters: “Touching wood is no way to run a business; you run it on what is happening, not what might happen. We will base future recruitment on success, that’s how we worked before Creston and how we work now.”

Creston chief executive Don Elgie claims he learned of the redundancies after the event, and says: “We bought DLKW on the basis of it delivering profits of &£2m per year. Our prediction for the end of this financial year is that it will deliver twice that. Its over-performance shows how daft the suggestion that we would pressure them to lose staff really is.”

Clemmow Hornby Inge is one of the biggest remaining independent agencies, and managing partner Johnny Hornby says that independence is what enables it to make management decisions in a way others might not. “Safeway was our flagship account when we lost it three years ago, worth 30% of our income [and serviced by] 16 people,” he explains. “We told those people we were going to find them new business to work on, and within months we won BT and British Gas.”

DLKW joint managing director Alex Kuropatwa says: “If Burger King and Premier Foods had happened six months earlier it would have simply been a case of hiring nine fewer people. Agencies fail because they don’t cut costs when they lose income. Freelance creatives and account people are well paid but it’s not a secure industry.”