The company says that it has seen difficult trading conditions within consumer media in its latest trading statement but that the regionals, with have seen dramatic falls in ad revenues previously, are showing “continued stabilisation.”

The group’s revenue from business to business operations rose 2%, with an underlying fall of 7%, for the period.
DMGT adds that for it is confident that it will meet market expectations for adjusted profits for the full year.

Andy Viner, head of media, at BDO Stoy Hayward says of the results: “Today’s trading update from DMGT is very respectable and in line with, indicating that their strategy of diversification of a balanced portfolio business to business media as well as consumer operations is working well.”

He pointed to positive signs such as circulation volumes stabilising and adds: ” DMGT now looks to be boosted by an improved advertising outlook for September, particularly from the property sector.”

Viner says: “Industry observers will also be keen to see more evidence of DMGT’s digital strategy at the full year results, which will be an important factor in the next few years as the newspaper industry continues to face structural decline.”

Revenues from DMGT’s consumer media operations for the 11 months were down 15% year-on-year year, with an underlying fall of 13%. The group says that the cost reduction target for A&N Media announced in May has been achieved and that the benefit of significantly lower costs will be reflected in the full year operating profit* outcome.

For Associated Newspapers, total underlying advertising revenues for the period fell by 16%, with underlying circulation revenues 2% lower. September has seen a better performance for total advertising revenues that in July and August, which were down by 21%. However, the publisher warns that “trading remains volatile from week to week with little visibility on future advertising performance”. It says circulation volumes have been more stable in recent months, aided by the success of the Daily Mail direct marketing campaign.

The company said that at Euromoney, the year-on-year declines in advertising, sponsorship and delegate revenues have continued at similar rates to those experienced since the second quarter. The rate of growth in subscription revenues has also continued to decline due to customer cuts in headcount and information buying. It adds that Euromoney’s focus on tight cost control and maintaining product margins continues to drive strong bottom line performance despite the fall in revenues, and trading in the key month of September has held up well. 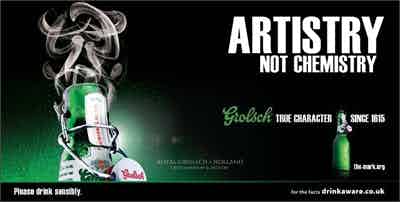 SABMiller is preparing to reposition its Grolsch beer globally as a “maverick” brand.

The UK arm of IT company Fujitsu is to review its £2 million agency roster as part of a renewed focus on creating a clear and differentiated positioning for Fujitsu in the UK marketplace.

Perricone MD, the US skincare brand at the cutting edge of the ‘cosmeceutical’ trend, has come to the UK, with a campaign that eschews the perceived wisdom of using ‘a beautiful face’ to sell the products.