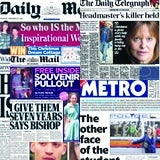 DMGT says that it sees future revenue growth as “largely digital, whether it be in the consumer or the B2B markets”. Mail Online is currently the biggest newspaper website by visitor numbers.

Revenue for the company’s digital only businesses rose by 1% to £95m with profit coming in at £6m, up from £5m.

Chief executive Martin Morgan says: “Trading exceeded our expectations throughout the year. Our UK consumer businesses have achieved a sharp improvement in profitability reflecting the actions taken to reduce costs and to eliminate loss-making activities and growth in our national advertising.”

He adds: “The group’s clear, coherent strategy and bold actions taken pre-recession together with a well diversified international portfolio of business, have combined to produce a strong result.

“In particular UK consumer businesses have rebounded well defying trends; benefiting from higher revenues, improving operating profits and tight cost control. The approach to digital continues to reap rewards with on line revenues up 54% and a strong increase in traffic of 70%.”

DMGT’s board says that it sees continuing economic uncertainty in the medium term and says its focus remains on cash generation and debt reduction, alongside a drive for organic growth “through new product development and investments.”