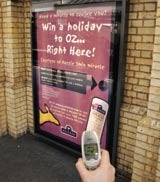 Viacom Outdoor launched a network of Bluetooth-enabled poster sites across the London Underground network last week. However, the sites may breach the Privacy and Electronic Communications Regulations (2003) because anyone with a Bluetooth phone walking within eight metres of one may be sent marketing messages, without the option to block them.

The Information Commissioner’s Office (ICO), the regulator for Britain’s privacy laws, says: “An individual must give their consent to an organisation before receiving direct marketing messages via Bluetooth technology.”

Viacom, which is using technology developed by US company Wideray, argues that consumers are only sent messages when they are close to one of the interactive posters and have their Bluetooth phone on and set up to receive messages. They then get a message asking them if they are happy to receive further messages. Viacom sales director for Impact and digital Nicky Cheshire says this gives consumers two ways to stop the messages.

However, critics say most Bluetooth owners will almost always be in receive mode, the usual default setting. A spokesman for the ICO says: “Leaving Bluetooth on should not indicate that an individual is willing to receive direct marketing messages.”

Bluetooth was not designed as a marketing medium. In fact, it cannot recognise individual phone numbers, making it difficult for consumers to opt in in the first place. The solution that Viacom has opted for is to warn consumers that being in a particular area with their Bluetooth devices in receive mode means they may receive marketing messages.

Robert Dirskovski, head of interactive media at the Direct Marketing Association (UK), says: “If the Bluetooth system is backed up with a warning to the consumer using ‘old’ media – like a poster – I would be happy.” He adds that the DMA is eager to work with Bluetooth marketing companies to develop the medium and resolve issues.

The DMA is about to publish guidelines on Bluetooth marketing on its website and the issue will be one of the first to be debated by the organisation’s new Mobile Marketing Council, due to hold its first meeting in March.

Craig Barrack, a mobile marketing expert, says using Bluetooth to “broadcast” such a message “would be the same as if they were spamming everyone with an SMS text message saying ‘do you want to get more marketing messages?’. That’s completely against the regulations and every mobile marketing code of conduct I’ve ever seen.”

But there is a more important issue, argues Rachel Harker, co-founder of mobile technology company Hypertag, which also offers interactive posters: “If you use Bluetooth for broadcasting without an opt-in mechanism, then it may reflect badly on the brands that are advertising, and consumers might become hostile to any use of mobiles for marketing.”