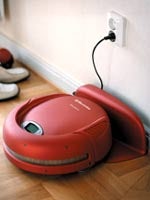 The world’s first automatic vacuum cleaner hit the shops in Sweden this month with a fanfare of publicity. Electrolux’s Trilobite, which should be available in the UK by next summer, uses sonar electronics to navigate its way around rooms and can even recharge itself when its batteries are running low.

More importantly though, Electrolux can claim to have developed a product that frees consumers of one of the most boring chores – vacuuming the house. However, autonomous vacuum cleaning comes at a price, as the Trilobite will cost about &£1,000.

Some industry insiders question whether there is room in the vacuum cleaning market for such a premium-priced product. Statistics compiled by Mintel in October last year valued the market in 2000 at &£480m – an increase of 53 per cent since 1995. But, tempted by the strength of the pound, manufacturers from the Far East such as LG, Samsung and Sanyo have moved into the UK market, making it more competitive. However, because of this competitiveness sales volume is increasing faster than sales value. The presence of these companies was cited as one of the reasons behind the crisis at electrical appliance company Moulinex, which filed for bankruptcy in September.

Aaron Rattue, account director at GfK Marketing Services, a marketing research company specialising in electrical goods, says that Electrolux’s move is a “big step in terms of price”. With the average price of a vacuum cleaner in 2000 at &£124, Rattue says that, although the Trilobite may attract a niche market, its long-term growth could be an issue.

Former Electrolux marketing manager and Chartered Institute of Marketing marketing director Ray Perry also casts doubt over the Trilobite. He says: “It [the Trilobite] is not particularly practical. It can’t go upstairs. It’s certainly cutting edge and can clean a small flat, but for most people it is not going to be particularly relevant or change their world. It’s not going to be a mass market product.”

But Electrolux vice-president of communications Tom Wells says that the company’s research shows that four to five per cent of the vacuum cleaning public would pay &£1,000 for an automatic device. According to Wells, this is the equivalent of about 156,000 people – more than the company’s projected sales for the Trilobite in the UK, although he refuses to name an exact figure.

Despite its price, Wells claims that eventually the Trilobite will be a commercial success. He says that most people expect buyers to be “the young, rich, urban, metropolitan males with Soho apartments, but I think it’s going to be a mass market product very quickly. For a lot of people &£1,000 isn’t a ridiculous amount of money.”

Earlier this month, a national newspaper report of a home trial of the Trilobite in the UK criticised the machine’s cleaning power. Wells admits that if the household has “big hairy dogs or messy children”, they may need another vacuum cleaner, but claims that most homes need about three vacuum cleaners anyway.

Marketing of the product in the UK has yet to be finalised, but Wells hints that the emphasis could be more on point of purchase promotions and PR rather than advertising. The latest available Mintel figures for 1999 show that vacuum cleaner manufacturers spent &£12.4m on main media advertising that year. Electrolux led the spending with a 22 per cent share, followed by Hoover, and then Dyson. But Rattue says that resisting a large advertising campaign for Trilobite may be a wise move. He says: “An awful lot of decisions are still made in the store. Running an in-store promotion is likely to have more effect than a high profile television campaign.”

Electrolux may have already taken this on board, as, according to AC Nielsen, the vacuum giant did not spend any money on advertising its vacuums over the 12 months to September 2001. This could indicate that the company is moving away from above-the-line advertising.

One of the obstacles Trilobite will have to contend with is another automatic vacuum cleaner from Dyson. Between spats with competitors, the Advertising Standards Authority and Which? magazine, the market leader Dyson, which holds more than 50 per cent of the UK vacuum cleaning market, has been busy developing the DCO6. Predictably Dyson says its cleaner, when it becomes available in 2002, will be superior to the Trilobite.

A spokeswoman for Dyson says: “It [the Trilobite] randomly bounces around the room and doesn’t clean properly.” She claims that the sucking power is too low to clean effectively and slates the Trilobite’s inability to clean stairs. She adds that the hose attachment on the DCO6, to be priced at &£2,000, means that there would be no need for another vacuum cleaner in the house. She adds: “Maybe if you don’t have a Dyson you need more.”

But Wells brushes these criticisms aside, maintaining that the Trilobite cleans effectively: “The key things are affordability, relevance and innovation.”

Wells adds: “I don’t know or care whether it [Trilobite] has got 90 or 9000 watts. When people start talking about the power and suction they’re falling into the trap of thinking about features not benefits.”

Perry thinks both products are priced too high. He says: “It’s not like the hi-fi market, where the first buyers have to pay considerably more. In the context of vacuum cleaners, it’s a distress purchase – no one delights in vacuum cleaning.”

He thinks the products are more about brand positioning and showing consumers that the companies are leading the way in innovation.

Association of Manufacturers of Domestic Appliances director general Peter Carver says that new products are always welcome and help keep the market fresh. He adds: “Innovation is always good for the market, as it raises consumer interest in the products as a whole. It is not like motor cars where people go into the showroom of that product. When people go to buy electrical goods they look at all kinds of products.”

Overall, the large white goods market, including vacuum cleaners, is booming says Rattue, pointing to a 4.1 per cent growth in value and 8.6 per cent growth in volume over the 12 months to August 2001. He attributes this to a number of factors including increased competitiveness, consumer confidence and the trend to replace rather than repair. Consumers, he says, are also replacing their goods before they need to, reflecting the growing trend towards home improvements.

But Rattue offers a word of warning: “White goods will always grow in a time of economic strength, but if we do have an economic slowdown the sector will be hit quicker than the other markets,” he says

In the current economic climate this is not a statement that bodes well for a &£1,000-plus vacuum cleaner.

Lakeside Shopping Centre has dropped its £1m advertising account with Doner Cardwell Hawkins and has handed the business to Jojo Communications without a pitch. The shopping centre is planning a major ad campaign in the new year, which could see it returning to TV advertising after a two-year absence, as well as exploring opportunities in […]

First Choice head of high street retail marketing Virginia Dick has been made redundant following a merger of the travel chain’s marketing departments. All three marketing departments have been folded into the new marketing, product and overseas operations division, which is headed by UK and Ireland marketing director Mike Ryan. The merger has sparked other […]