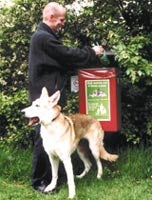 OK, so we may not get to see Clint Eastwood advertising stairlifts (keep up, you at the back), but something else has come to the Diary’s attention – and it may revolutionise ambient media.

In an ambient promotion for its dog-worming treatments, the company has hired space on “poop bins” – you know, those things you are supposed to put your dog’s doings in.

The company claims its ads can be seen on more than 7,000 such bins, across 38 local authority areas – good coverage indeed. The question is: how will dogs read the advertising message?

Surely they won’t rely on us poor dumb humans.