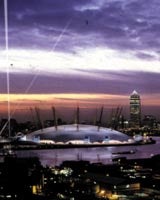 The sponsors of the Millennium Dome, who paid up to &£12m to be involved, have found that only a fraction of the low number of visitors to the attraction are experiencing their zones.

The number of visitors to the Dome up to November 12 was 5.5 million, 4.5 million of whom were paying visitors – far short of the 12 million the New Millennium Experience Company hoped to attract.

BT, one of the headline sponsors which paid &£12m, says 2 million people have visited its Talk Zone. It expects a total of 2.5 million to visit by the end of the year. The company did not publicly forecast how many visitors it expected initially.

But a BT spokesman says the company is happy with the visitor numbers, which are “broadly in line with expectation”.

He adds: “We could not have handled many more visitors.”

When asked if BT believes the Dome’s poor publicity has reflected badly on the sponsor, the spokesman says: “It is difficult to separate the overall impression of the event from those participating in it but there is no indication that BT has been hurt by the bad press.”

Manpower, another &£12m sponsor, says it has attracted three million visitors to its Work Zone, mainly due to 1.5 million school visitors. A Manpower spokeswoman says: “Our figure, and that of the Learning Zone, may be higher than other zones because they are recognised as educational.”

Having read David Pugh’s article (MW November 9) about personal video recorders I was outraged. There are many misconceptions flying around about PVR’s effect on viewing. The early US “research” he refers to was carried out in 40 homes – hardly representative or conclusive. Also, all PVRs are not the same. TiVo, which Sky was […]