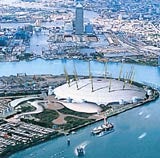 Who says sponsors have no influence? Maybe not in television, but in the wonderful world of “visitor attractions” there is no equivalent to the Independent Television Commission to put commercial companies in their place.

The premature departure of Jennie Page as chief executive of the New Millennium Experience Company (NMEC), who is to be replaced by Disneyland’s Pierre-Yves Gerbeau, confirms that he who pays the piper calls the tune. Or, in some cases, that he who has promised to pay the piper, but has yet to do so, calls the tune.

The tardiness of a few Millennium Dome sponsors in not signing their contracts and coughing up may not have worsened the project’s cash-flow problem, but it hasn’t helped. It has also added to the stream of bad publicity the sponsors have complained about.

By not paying in advance, a handful of sponsors – contributing up to &£12m each and &£160m in total – strengthened their bargaining hand. But they aren’t the largest paymasters for this particular piper. That honour – or burden – goes to the Millennium Commission, which has put up &£400m of public money from the National Lottery, a &£50m loan, plus, in the past few days, a further &£32m advance on sales.

This latest Lottery loan (which also added to the bad publicity) came with strings, announced last Friday – namely, a requirement for the NMEC to introduce management efficiencies and improvements. The removal of Page was not one of those conditions, but by then she had been told by the NMEC board that her job was going to someone else. The Commission is said to be nervous that her replacement by a Disneyland executive could lead to the “Disneyfication”, or trivialisation, of the Dome.

It is clear it was the sponsors which triggered the events that led to Page’s departure. Interviews on Sunday’s The Money Programme on BBC2 and Monday’s Today programme fleshed out earlier newspaper reports of the extent of the sponsors’ unhappiness. These companies, of course, include such blue-chip names as Ford, Tesco, BSkyB, Boots, McDonald’s, British Airways, Marks &amp; Spencer, BAe, BT, Camelot and de Beers – though the best-known names did not go public. It was left to Manpower’s chief executive Iain Herbertson – whose company also provides the staff for the Dome, giving it a dual relationship with NMEC – to speak for the sponsors. The following day Boots went public too.

Herbertson called for a “world class team of leisure industry professionals” to manage the day-to-day running of the Dome – and, sure enough, when the appointment of Gerbeau was announced, he was duly described as “a world-class professional” – though later reports questioned just how much responsibility he had for the rescue of EuroDisney. Herbertson had insisted he was not calling for Page to quit. He told the Evening Standard: “She has done an excellent job to date, but the skills needed to run a world-class leisure business are different from those needed to run a construction business.”

Once again this “word from our sponsor” was echoed in the weekend’s explanations for Page’s departure. An unnamed NMEC “senior executive” and the Dome minister Lord Falconer both said she had done an excellent job in getting the Dome built on time and on budget, but now the project had moved into a new phase and different skills were required.

Publicly, if not privately, most of the sponsors have been supportive of Page, even though many were frustrated by her determination to ensure they did not “take over” the Dome. “This will not be ‘logo-land'” she insisted and, despite claims to the contrary, it is not. The sponsors’ credits, outside and inside their zones, are remarkably discreet – which may also have contributed to their frustration.

Critics – such as the first (and short-lived) creative director of the Dome Stephen Bayley, who never saw eye-to-eye with Page – decried the presence of McDonald’s. But as Adam Nicolson points out in his book Regeneration, the need to produce up to 80,000 meals a day in the Dome precluded Bayley’s preference for the catering to be done by artisan British bread and cheesemakers.

Surprisingly, the editor of The Independent, Simon Kelner, displayed an equally snooty attitude to fast-food. I’m sure I heard him telling listeners of Radio 4’s PM that he had never been to a McDonald’s and wasn’t planning to start, even though NMEC was offering him free tickets and vouchers to spend at the Dome to compensate him for the delays he had suffered on New Year’s Eve.

I should have thought it was a requirement for the editor of any medium that portrays itself as being in close touch with the British public to have eaten at McDonald’s. But of course Kelner’s main point was that he would not want to go back to the Dome after the way he and other editors and media executives were treated at Stratford station that night.

Many people – including some visitors from the West Country I interviewed at the Dome last Friday – believe the editors have been wreaking vengeance on Page and NMEC ever since. Other equally influential guests on Millennium Night not only suffered inconvenience and frustration themselves, but had the embarrassment of having to apologise to dozens of their own guests at the Dome. These were, of course, the sponsors.

Since then they have had real grievances about the queues and equipment failures that have dogged the Dome – but these were being sorted out. The real problem for the sponsors has been the dire publicity.

Without the delays for the editors and sponsors at Stratford on New Year’s Eve, would these incidents really have led to the dismissal of the woman who actually made the Dome happen?