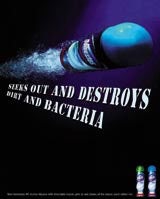 Lever Fabergé is set to make a U-turn on its Domestos brand strategy with a &£12m relaunch next year featuring a raft of variants outside its core bleach range.

However, the company now intends to return Domestos to the household cleaning market with a line of cleaning sprays in March. The range will be formulated with a milder, bleach-free cleaning liquid, which industry sources say will be sold specifically for kitchen use.

The Domestos toilet bleach will also be extended with a pink-packaged variant known as Domestic Pink Power, which will be marketed as a softer version of the bleach, with a floral scent.

One industry pundit fears the move could end in failure. He says: “Consumers associate Domestos with a hard bleach, which could make them reluctant to use the spray around eating surfaces.”

Lever Fabergé pledges to support the Domestos brand with a &£12m ad budget in 2004. Advertising for the brand is handled by roster agency Lowe in the UK, with media duties performed by Initiative Media.