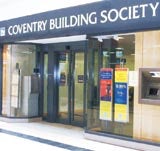 Coventry Building Society, the UK’s fifth-largest building society, has awarded its advertising brief, estimated to be worth £1m, to Doner Cardwell Hawkins.

The agency, which won the brief following a five-way pitch overseen by the AAR, will work on a project basis initially, with a view to being retained on a longer-term basis.

Previously, the mortgage and savings provider had worked with financial specialists Teamspirit, which is not thought to have repitched for the business.

In the past Coventry used real customers in its marketing and advertising campaigns, and built its strategy around its “TLC not PLC” slogan to emphasise the society’s continued commitment to mutuality. Last year, children’s television character Willo the Wisp was used on posters and mailshots to promote its “MOREgage” mortgages for first-time buyers.

The society, which was established in 1884, has assets of more than £9bn. Its customers are reached through its high street branches, the Web, telephone, post and a network of intermediaries.