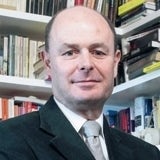 It may have taken media players a while to hear of Shaun Woodward’s new role, but his broadcast experience gives him a head start in solving industry issues

Who is the new minister for broadcasting, the press and other media and creative issues? I only ask because I keep bumping into people who know him but haven’t yet heard about his new job.

On Monday at the Advertising Association annual lunch, a senior agency figure brought his name up in a conversation about politics and advertising. “You mean the new broadcasting minister?” I ventured. He ignored the remark for a while, and then said “Sorry?”

Last week, I was chairing a conference of television documentary makers, several of whom had worked with the man in question when he was a producer and editor at the BBC. None of them had caught up with the fact that he will now be leading the negotiations over the BBC licence-fee settlement, among many other responsibilities at the Department for Culture Media and Sport.

Shaun Woodward – for it is he of whom I speak – was the editor of That’s Life and also a producer on Newsnight and Panorama before he went into politics. For two years, he was communications director of the Conservative Party, working with Saatchi &amp; Saatchi on the 1992 election campaign that John Major won, to some surprise. He then became a Conservative MP before famously crossing the floor to join Labour.

So why haven’t more people caught up with what he’s now doing? The Government reshuffle began the day after the local elections on May 5. It took all that Friday to sort out the Cabinet posts and the next layer of jobs. James Purnell, the last minister for creative industries and tourism (to give the job its full proper title), was promoted to minister of state for pensions. Woodward’s move from the Northern Ireland Office first emerged on the Saturday, but it wasn’t confirmed by the Culture Department until the Monday, by which time the news was presumably regarded as too old for Media Guardian to alert subscribers to its text messaging service. It didn’t make the Broadcastnow website until the Tuesday. In the age of instant news, this was steam-age coverage.

But now that he’s installed, Woodward’s background gives him a head start in getting to grips with his wide-ranging responsibilities. He acknowledged as much/ “Ten years of working in the broadcasting industry will undoubtedly help me both understand and promote the creative industries within Britain and across the world.

“Whether it’s television, film, computer games or the music business, we have a fantastic set of opportunities with which I am thrilled to engage. And the 2012 Olympics will offer a unique opportunity to the UK tourism industry and I want to ensure that we seize this moment.”

One of his first public engagements is likely to be the Cannes Film Festival, which starts this week. That is unlikely to be a hardship, but he must also get up to speed on the digital switchover campaign that has recently launched, and the implementation of the Licensing Act, bequeathed to him by Mr Purnell.

The Act is still causing great confusion, not least at the BBC, which is having to use its own staff as audience-members for entertainment shows such as Top of the Pops and Top Gear. Lawyers and local councils have been considering the wording for months and now maintain that the BBC needs a licence to stage such entertainment shows, so, for the time being, the public is not allowed in.

But the big issue on Woodward’s plate is the BBC licence-fee settlement and – inextricably entwined with it – the final wording of the next BBC Charter. The licence-fee negotiations are due to be concluded this summer, and commercial broadcasters, local newspaper publishers and internet providers have been lining up to urge the Government to clip the BBC’s wings.

They’ve now been joined by the Opposition. Last week, at the annual Newspaper Society lunch, the Conservative leader David Cameron was invited to lend his weight to the campaign by local newspaper publishers to curb the BBC’s move into local internet and TV services. He told them he was a big fan of the BBC, but agreed that there had to be ways to make sure it didn’t over-extend itself.

This week, the shadow Chancellor of the Exchequer, George Osborne, has gone further, comparing the BBC to a bull in a china shop. In a speech at a media conference in Oxford, he said it must not be allowed to abuse the privilege of its licence-fee funding to “crowd out” smaller media players. He argued that the BBC was stifling the growth of new internet companies and that its plans for more local TV programmes could have a “ruinous” effect on local newspapers and radio stations.

In his previous life as a Conservative MP, Woodward might have had some sympathy with this view. We wait to see what he says in his new role. But now that his former colleagues in broadcasting and advertising have found out what he does, he won’t be short of advice.