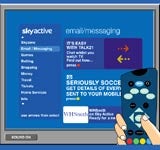 If you didn’t read past the headline of Robert Dwek’s article “Retailers can’t profit from iTV” (MW September 20), you would have been left in no doubt that t-retail (or t-commerce) has been a huge failure. If you did read the article you would probably be left with the same impression.

But the truth about t-retail is somewhat more complex.

While it’s fair to say that a lot of retailers on the Sky Active platform (formerly Open) were not exactly bowled over by revenue generated by the service, both sides of the story should be presented.

There have been a number of companies which report very encouraging sales through TV. Domino’s Pizza says it is earning £200,000 a month from all of its t-commerce activities; Carphone Warehouse’s iTV outlet outsells its three Oxford Street stores and Woolworths claims Sky Active is its fifth-largest store in turnover. In addition, Sky claims up to 30,000 bets are placed for each football match.

But perhaps more promising is the success of niche channels, such as TV Travelshop which has captured eight per cent of the package-holiday market in just two years. There is also good news across the Channel – France has two t-commerce platforms, both of which enjoy steady growth, with solid results predicted for the next three years.

Having said that, I agree that walled gardens such as Sky Active are a flawed concept – they restrict viewers to the limited number of sites or storefronts that they accommodate and therefore could never be a huge success.

But – and it is a big but – the varied success of Sky Active in no way suggests that t-retail doesn’t and isn’t going to work. All it says is that the walled-garden approach does not inspire, educate, inform or entertain customers – essential elements if t-retail is going to work. Successful t-retail will be all about tying content, communication and commerce together. That is, entertaining and informative TV tied to an easy-to-use commerce fulfilment system.

Retailers should not just think of iTV as a sales mechanism. If done properly, a retailer’s ITV service should also pre-educate consumers for a high street sale by building desire and aiding decision making, enable direct communication of brand values and reinforce marketing messages. In the same vein, companies should not fall into the trap of thinking of iTV as an alternative channel to market, but simply as part of a multi-channel strategy made up of high street stores, call centres and online operations.

Some retailers have started to look beyond the walled garden for t-retail opportunities and, while few have got it right so far, it is clear that this is about to change soon. Boots and Sainsbury’s cottoned on to the idea through their quasi-branded TV channels, but even then they still tried to use expensive, old-fashioned broadcast models and didn’t have true t-commerce applications at the core of their proposition. That might explain why Taste! died a dismal death and why Wellbeing is struggling.

Yet despite this, there are others who are developing innovative ways of making TV and as a result new ways of making iTV work. So the branded TV channel might just be the great saviour for t-retail. Predications by experts at management companies KPMG and Cap Gemini Ernst &amp; Young suggest that up to a quarter of UK retailers will launch branded TV projects by 2005.

So while t-retail may not be at the top of the agenda this year or maybe even the next, it’s too early to close the shutters on iTV just yet.