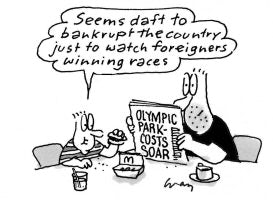 Hope may have triumphed over Experience in the bid to host the 2012 Olympic Games, but Experience knows what will happen next.

Despite Dr Johnson’s warning, when apple-cheeked Hope confronts crabbed Experience, she always emerges triumphant. And there is ever a price to pay; Experience tells in the end but, by then, it is too late and memories are short. So it will prove again when the caravan moves on and the London Olympics 2012 are dusty history.

All that will remain of the greatest show on Earth will be debt, litter and vast, empty buildings choked with buddleia and ivy, daubed with graffiti and strewn with syringes left behind by the athletes. No one can say we we were not warned.

Experience said it would happen, but no one listened. All they could hear were the honeyed words of Hope. They nodded in bewitched agreement as she promised, with a blinding smile, that great swathes of run-down, neglected outer London would be transformed into shining citadels where children played, adults laughed and prosperity shed its golden glow. They exulted when she said that creaking transport systems would, at the touch of the Olympic wand, spring into streamlined life. “Just imagine”, she cooed, “for four thrilling weeks London will be the cynosure of all eyes, a vast gilded receptacle into which untold wealth will be poured. And then there will be the Legacy.”

“Legacy? What legacy,” they cried, clapping their hands.

“Our youth?” “Yes, those bloated, spotted creatures who hold the future in their soft, plump hands. Come the Olympics these roly-poly specimens, fired by the example of supreme athleticism, will turn their backs on sloth and become rippled, sinewed amalgams of Adonis, Narcissus and Endymion, the envy of the world.”

So, not surprisingly, when Experience poked his thin nose round the door and wagged a bony finger of admonition they were in no mood to listen.

Experience has a convincing case. The Olympics has a history of impoverishing the host city and bestowing a legacy of debt. But such is the overweening vanity of politicians and the economic ignorance of Olympic organising committees that the folly is repeated every four years, with Hope always emerging victorious. A future Gibbon will take pleasure in chronicling the eagerness with which advanced economies fought, with much skulduggery, for the right to beggar themselves. And to what end? To provide a shiny arena for, among other things, beach volleyball, and to play host to pampered cheats and misfits.

London 2012 will be different in only one respect: six years in advance we know what to expect. Last week, the Commons select committee heard the London Olympics could face financial problems, divert massive amounts of Lottery money from other sports and leave no legacy. Tim Lamb, chief executive of the Central Council for Physical Recreation (CCPR) said the games would drain almost all the available finance for sport. And Brigid Simmonds, chairman of CCPR, warned that London 2012 could follow the pattern of previous Games and have no impact on people’s participation in sport, nor leave a lasting legacy.

At the end of the hearings, Conservative MP Nigel Evans was heard to utter: “It is hugely depressing”. To which Experience might reply, “If you’d listened to me in the first place, mate, you’d have known exactly what to expect.”

Marketers, however, need not dismay. McDonald’s and Coca-Cola are leading sponsors of the International Olympic Committee. Dr Jeff Collin, of Edinburgh University’s centre for international public health policy, says: “The Games aim to inspire ‘a new generation to greater sporting activity and achievement, helping to foster a healthy and active nation’ – an ambition we find difficult to reconcile with the presence of McDonald’s and Coca-Cola as official sponsors.”

Perhaps Experience should have a word in his ear, too.