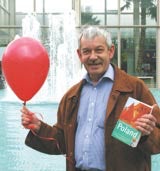 “Welsh Windbag” Neil Kinnock made waves on the Continent by becoming a European Commissioner. But there was only one of him. The Diary has received news of a whole host of English windbags rampaging across mainland Europe.

Last August, the people whose business it is to promote Milton Keynes (not the Football League, which has tended to relegate the town) launched 10,000 red balloons, to raise money for charity and mark the 20th anniversary of the town’s famous television ad.

Each balloon carried a ticket bearing the name of a Milton Keynes resident, and offering a free trip to the Bedfordshire town to the person who sent one back from furthest away. Perhaps surprisingly, people did enter, and one Krystian Kochanowski from the Polish town of Koszalin will shortly be sampling the delights of Sixties British architecture.

Keith Lewington, whose balloon won, is meanwhile taking a short break in Warsaw (the one in the picture is played by an actor), having promised Milton Keynes’ mayor that he will come back – honest.