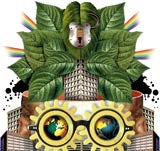 People who mistrust – or are envious of – big businesses may claim that success is based on exploitation. They see successful multinationals as being motivated by profit, with no moral interest in the means of achieving it, even down to the items they offer in promotions. This might seem to suggest that promotional merchandise is likely to be unscrupulously sourced, bought cheap from child-exploiting sweatshops in the Far East or made from materials pillaged from rainforests. Thankfully, these assumptions are generally unfounded. This is not because big business has had a sudden moral awakening, but because companies simply can no longer afford to to use unethical means to source products, whether promotional or not. This is true on several levels, by far the most critical being reputation.

The bigger and higher-profile the organisation, the less likely it is to risk being associated with anything ethically suspect. One mistake and a company can be deeply scarred, repelling customers and investors in droves. But when did the business world start to accept social responsibilities, and how can companies be sure the promotional merchandise they use is ethically sound?

The Tradewinds Merchandising Company has been creating promotional goods ethically for 20 years. Company director Tim Salthouse recalls: “Two of our earliest clients were Friends of the Earth and Greenpeace. But now only about 20 per cent of the work we do is for charities.”

Salthouse puts the growth in his – predominantly non-charitable – client base firmly down to fear. He says: “Companies are increasingly aware of the pitfalls of buying from unknown sources, and there’s growing concern about where and how merchandise is produced. This must be due in part to well-publicised cases in recent years involving major brands and child labour. Scandals involving workforce exploitation in third-world countries can be damaging, not only for the supplier sourcing the merchandise, but for the client too – and ignorance really isn’t an excuse.”

American companies have fared particularly badly in this respect. Anti-exploitation legislation is already in place in the US, and “ethical vigilantes”, such as the student union group that spends every summer holiday investigating where companies operate in order to name and shame offenders, are particularly vicious. Nike and Gap are just two of the high-profile retailers that have been exposed to such criticism.

“America is streets ahead of the UK,” says Peter Warbrick, UK representative of the Californian Safety Compliance Corporation (CSCC), one of the longest-established social and ethical monitoring companies, set up in 1990. However, he says, the UK is catching up quickly, and CSCC is fielding large numbers of enquiries.

“With 200 staff, based in 98 countries, we are perfectly placed to carry out social and ethical audits of our clients’ suppliers to ensure the goods they are receiving are being produced without exploitation,” Warbrick explains. CSCC will even oversee supply chain development, ensuring that a company can be confident of its ethical nature.

The fact that CSCC is busy is no surprise. Companies in the UK are learning from their US counterparts that having an “unethical” blot on their copybook is simply not worth the risk. This has been heightened by a Green Paper published on July 18 by the European Commission, discussing the formulation of a legislative framework of corporate social responsibility for Europe.

Not just what but how, too

Peter Ord, managing director of Cheshire-based The Merchandise House, has also noticed the increase in demand for ethical promotions and incentives. “Ethical standards are now as much an issue as design, price, quality and lead time. In the past month the subject has featured strongly in discussions with key clients including, Airtours and Jack Daniels,” he says.

Although, as the Green Paper suggests, it may not be long before Europe has its own ethical legislation in place, at the moment individual merchandise suppliers, and the companies commissioning promotional incentives, are responsible for setting their own levels of responsibility when it comes to implementing ethical standards.

However, Ord suggests a good starting point: “Although it’s not a global solution, the Merchandise House works to the ethical practices set out by the UK’s Chartered Institute of Purchase and Supply (CIPS), of which several of our procurement team are members. The CIPS ethical policy covers all the emotive issues such as child labour, forced labour, hazardous and dangerous conditions, people’s rights to representation, general working standards and food hygiene within the factory.”

Obviously organisations such as CSCC, which will police your suppliers to make sure they stick to your ethical policy, don’t come cheap. So what’s the alternative? Companies seeking promotional incentives should ensure their merchandise supplier has an ethical policy in place and ask for details and proof if necessary. If the company already has high-profile clients there is every chance that the merchandise it supplies is ethical.

“Most major companies have approved merchandise suppliers, which have been checked out thoroughly and would not be used if they didn’t comply with strict ethical codes,” says British Promotional Merchandise Association development consultant Brenda Simonetti.

McDonald’s is typical in this respect. Referring to the fast food giant’s Happy Meal toys, a spokeswoman says: “McDonald’s has a code of conduct for all suppliers, with strict guidelines regarding hiring practices, working conditions, minimum wage and compliance with local regulations. SGS International Certification Services, an idependent testing, inspection and certification group, conducts periodic announced and unannounced audits of McDonald’s suppliers and subcontractors.”

Merchandising and incentives suppliers need to enforce ethical standards of practice among your manufacturers, as they come under increasing pressure from clients to prove their ethical mettle. Ord says: “The Merchandise House requires every factory within its supply chain to be either inspected by its own staff or guaranteed by the manufacturer. It’s not enough to inspect just one facility, because a company could have a wonderful garment factory, but if the cloth manufacturer is poisoning its workers with toxic dyes, that’s still compromising ethical standards, putting staff and customers at risk.”

Stick with the herd

Ord has been a frequent visitor to the Far East over the past 25 years and says that, just as a company looking for a merchandise supplier should look at suppliers’ other clients, so too a merchandising supplier should look at the other clients supplied by the factory that it is considering: “Find out who the factory is currently dealing with in the West. If, like one of the factories I recently visited, it is already supplying established companies such as Lee and Umbro, you can be assured ethical standards are being met.”

Whether you’re a merchandising supplier or a company looking for promotional merchandise, this extra effort might mean that an ethically assured marketing incentive costs rather more than one with a less certain provenance. So are these extra costs purely going towards preserving or improving a reputation or do companies gain in other ways from taking an ethical stance? Warbrick says: “Knowing your promotional merchandise has been ethically produced protects your company’s brand and gives you peace of mind. However, you can also tell potential customers of your ethical credentials and use it as a selling point.”

And it’s all very well worrying about reputation in the market, but what about reputation closer to home? “Commitment to corporate responsibility is a sign of good management and makes employees pleased and proud,” says Kate Dunning, EMI Group’s UK director of environmental affairs, a company which, through digital printing of its marketing materials, last year saved 26,000 litres of chemicals and 40,000 square metres of laminates and film in Europe and North America.

A pound’s worth a hundred pennies

Then there’s the quality of the merchandise itself. “Better working conditions produce better-quality products,” says Warbrick.

Salthouse adds: “I would always advise clients to go for quality, even if it means they have to buy less. In some ways making a promotional item a little more expensive can actually add to its exclusivity and desirability. Poor-quality merchandise can damage a brand’s image. Furthermore, if a piece of merchandise looks bad or falls apart it won’t be used. If the item is designed to be seen and promote a brand, that rather defeats the purpose.”

He concludes: “Companies spend millions on above-the-line campaigns and then spend the absolute minimum on promotional products, but it’s a false economy. Cheap can cost you dear in the long run.”